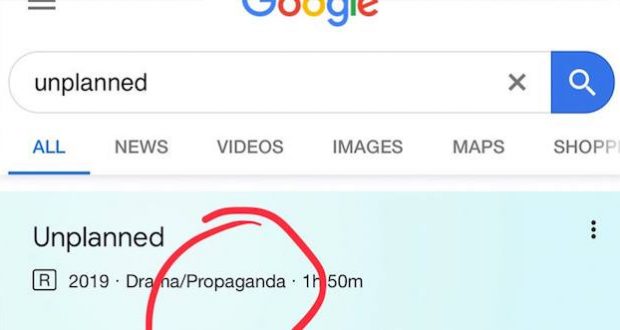 Google continues to solidify the suspicions of the public of bias against pro-lifers. This week the online search engine giant labeled the “Unplanned” film “propaganda.”

“Unplanned” is based on the true story of Abby Johnson as she worked for Planned Parenthood and eventually had a change of heart after watching an unborn baby be aborted during an ultrasound-guided abortion. It earned a surprising $6.1 million on opening weekend, and stayed in the top 10 in its second week at the box office.

But it has faced its share of hurdles, including ad rejections by most major TV outlets and a temporary suspension on Twitter.

The Google search engine described the film as “drama/propaganda” this week, according to various screen shots posted by the filmmakers and conservative journalists.

Kelsey Bolar at The Daily Signal appeared to be the first to notice Google’s “propaganda” label on the film, Fox News reports. She posted a screen shot of Google’s search results for “Unplanned” Thursday on Twitter. Fox News also verified Bolar’s findings.

“Who knew that ‘propaganda’ was a movie genre? Google once again exposing its gross political bias,” Bolar wrote.

Margot Cleveland, a writer at The Federalist, noted that Google did not use the “propaganda” label for Al Gore’s environmental film “An Inconvenient Truth.”

Others noted that none of liberal filmmaker Michael Moore’s movies are described as “propaganda” on Google either.

A few hours later, Live Action noticed that Google changed the description. It now describes the film as a “drama.”

A Google spokesperson told Fox News that the label was the result of an analytical error based on a “large volume” of web content that described the film as “propaganda.” The spokesperson said they fixed the error when they became aware of it.

Interestingly, a few weeks ago, Planned Parenthood CEO Leana Wen posted a photo of herself on Twitter hobnobbing with Google executives at its headquarters in California. The abortion giant has blasted the film as propaganda to a number of mainstream and liberal news sites.

The filmmakers have struggled to overcome numerous hurdles in publicizing the film, including being suspended on Twitter and having their ads rejected by major TV networks, including Lifetime, Hallmark Channel and HGTV.

The film opened in theaters nationwide at the end of March. “Unplanned” opened in fourth place during its first weekend and it expanded to more movie theaters last weekend.

Previous: Suspect in church arson sang of hate for churches
Next: Churches raided by police in rebel held areas of Ukraine