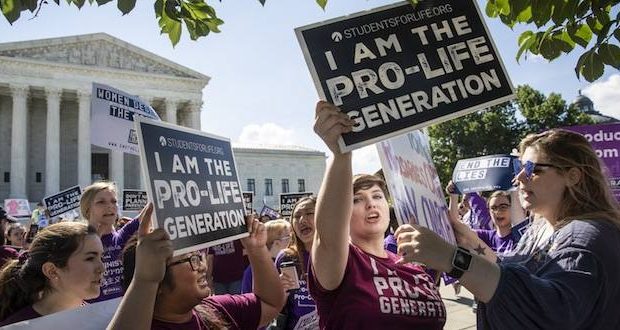 Pro-life Californians share their views on the grounds of the state capitol.

Half of all states will protect unborn children if Roe overturned

More than half of the states would ban abortion if the U.S. Supreme Court overturns Roe v. Wade, according to the pro-abortion Guttmacher Institute.

“If Roe were overturned or fundamentally weakened, 21 states have laws or constitutional amendments already in place that would make them certain to attempt to ban abortion as quickly as possible,” according to the organization. “Anti-abortion policymakers in several of these states have also indicated that they will introduce legislation modeled after the Texas six-week abortion ban.”

These states likely would be among the first to implement a ban:

Nine states have pre-Roe laws still on the books banning abortion: Alabama, Arkansas, Arizona, Michigan, Mississippi, Oklahoma, Texas, West Virginia and Wisconsin. Missouri is among 12 states that have “trigger” laws that are designed to ban abortion and only go into effect if Roe is overturned The others are Arkansas, Idaho, Kentucky, Louisiana, Mississippi, North Dakota, Oklahoma, South Dakota, Tennessee, Texas and Utah. Some states have multiple types of bans in place.

READ: What’s the Mississippi case about?

The Supreme Court heard two hours of oral arguments in the legal battle involving the Mississippi law that prohibits abortions after 15 weeks of pregnancy. In the landmark 1973 decision in Roe v. Wade and reaffirmed in 1992’s Planned Parenthood v. Casey, the high court said states cannot ban abortion before fetal viability — the point at which the fetus can survive outside of the womb, which is now considered to be between 22 and 24 weeks of pregnancy. But since that time, viability has lowered considerably with some babies surviving birth at just 3 months gestation.

If the Mississippi law is found constitutional, abortion would not be banned but, rather, the power would be returned to the states as outlined by the framers of the Constitution.

“We may well be on the verge of era when the Supreme Court sends Roe v. Wade to the ash heap of history where it belongs,” former Vice President Mike Pence said at an event Tuesday, during which he also called on the high court to “make history.”

Pro-life groups are applauding the possibility of states moving to ban the killing of pre-born children if Roe is overturned.

Even pro-life feminists are among those encouraging the court to uphold the Mississippi law.

Among the groups that signed the “pro-life feminist” amicus brief are Secular Pro-Life, a group led by athiest women — one politically conservative, one moderate, one liberal — that opposes elective abortion, supports contraception and does not take an official position on abortion in cases of rape or incest. Another is Feminists for Nonviolent Choices, a “consistent life” organization that opposes abortion and capital punishment and advocates for better working conditions and fair housing. New Wave Feminists promotes nonviolence from “womb to tomb,” with a focus on immigration, racial justice, human trafficking, and pre- and post-natal care.

New Wave Feminists President Destiny Herndon-De La Rosa said the group started 15 years ago as a MySpace page and evolved into a national organization. Its members are “all over the place politically” and come from a variety of religious backgrounds, including atheism and agnosticism. The group doesn’t typically focus on the legality or illegality of abortion, but decided to sign onto the Dobbs brief because its framing made it a “vital part of the conversation” about abortion and gender equality, she said.

“We want to expose the fact that so many women don’t actually have a choice when it comes to making an abortion decision because of the systemic patriarchy that says to operate and succeed in a man’s world, your fertility will make you a liability,” Herndon-De La Rosa said.