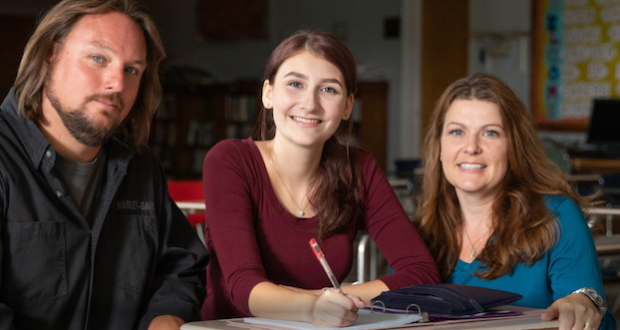 David and Amy Carson of Maine, pictured here with their daughter, Olivia, are challenging a 41-year-old policy that that limits to secular schools a state program offering financial assistance to families seeking education choice for their children.

The U.S. Supreme Court on Wednesday heard oral arguments in an important school choice case. Carson v. Makin challenges a Maine law that prohibits parents from using a state student-aid program if they choose to send their children to faith-based schools.

The plaintiffs are parents in three small Maine towns where the local school district offers high school tuition payments for students to attend the public or private secondary schools of their choice in lieu of maintaining public schools of their own. However, state law prohibits those towns from paying tuition on behalf of families who choose otherwise qualified religious schools.

Some say, even with the vouchers, the state has failed its primary responsibility in making schools equally, and conveniently accessible to all parents. Some students must travel over 1 1/2 hours each way to another public school while religious schools are often much closer.

In the sparsely populated state, parents living in some rural areas without a local public school receive vouchers so that they can send their children to public or private schools in other areas. The aim of the program, the state says, is to give students an education that is roughly equivalent to what they would have had if there had been a public school in their area.

The families who filed the lawsuit qualify for Maine’s tuition program in all other respects, but they are excluded from participating only because they chose religious schools for their children. Such discrimination is both unfair and unconstitutional, according to the families’ attorneys.

Justices, including Samuel Alito, Clarence Thomas, Neil Gorsuch and Brett Kavanaugh, suggested that if a state makes the choice to provide a public benefit, it can’t exclude schools based on the fact that they teach the curriculum through the lens of faith. The court has sided with religious institutions based on similar arguments in the past
“All they are asking for is equal treatment,” Kavanaugh said at one point, referring to the parents who want to use the funds for sectarian schools. “They’re saying don’t treat me worse because I want to send my children to a religious school rather than a secular school. Treat me the same as the secular parent next door.”
But Chief Justice John Roberts, who has sided with the liberal justices in the past, expressed skepticism about the process Maine would go through in order to decide whether schools with a religious identity are going too far in “infusing their subjects with religion.”  Justice Amy Coney Barrett and Neil Gorsuch, on the other hand, seemed skeptical of the state’s position. Gorsuch said that the court has made clear that “you don’t have to choose between receiving a public benefit and your faith.”

“Maine families deserve the right to choose the education they believe will be best for their children, whether or not the school teaches religious values,” said Amy Carson, one of the plaintiffs. “We’re hopeful that the Supreme Court will make a decision that could open the door to better education for families not only in Maine but across the country.”

Maine’s program was open to religious schools for a century and changed its policy only after an opinion by the state’s attorney general without any clear direction from courts or public demands for such actions.

“By singling out religion — and only religion — for exclusion from its tuition assistance program, Maine violates the U.S. Constitution,” attorney Michael Bindas said. “Religious schools satisfy Maine’s compulsory education laws and meet every secular requirement to participate in the tuition assistance program, yet parents are barred from selecting them simply because they also provide religious instruction. That is religious discrimination, and the Constitution does not tolerate it.”

Zachary Heiden, staff attorney with the American Civil Liberties Union of Maine, agreed with Bam’s assessment that most justices were “skeptical” of the state’s position that private schools want an equal share of state funding.

“There is no evidence that these schools want to participate in the [public funding] program,” he said.

Previous: How does government welfare measure up against church or charity help?
Next: Half of all states will protect unborn children if Roe overturned