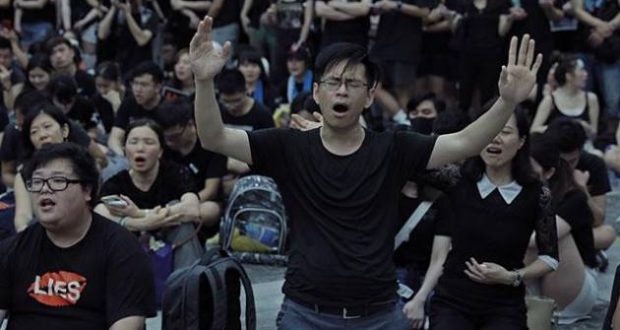 ‘Hallelujah to the Lord,’ sing students to Chinese police

An extradition bill that would have sent criminal suspects to communist China for prosecution seems to be dead for now, but Hong Kong’s students keep pushing back against the heavy-handed rule of Beijing and their communist intentions.

Some have characterized the conflict between China and Hong Kong as a conflict between communism and Christianity, and an unofficial anthem of the students at the protests is “Sing hallelujah to the Lord.”

Hong Kong leader Carrie Lam has apologized for the extradition bill that set off massive protests, but said she would not resign.

She only backed down after millions turned out to protest what they believed to be an attempt by China to further erode its independence.  As a British colony, Hong Kong had political, religious and economic freedom and it grew to one of the major financial powerhouses in the world. When the UK turned Hong Kong over to China in 1997, those freedoms were supposed to be protected, but residents see the extradition law as one in a series of attempts to take them away.

Students, fearing for their future, are not backing down.

“The extradition law really is a threat to the legal and judicial independence of Hong Kong from mainland China,” says news correspondent Lucille Talusan. “And this goes against the agreement made during the 1997 handover of Hong Kong to mainland China.”

The last British governor of Hong Kong, Chris Patten, said the West needs to stand up to Chinese attempts to demolish what he called the “firewall” between “the rule of law in Hong Kong and what passes for law” in mainland China.

“We should make it clear that this is not a policy or a succession of policies which we are prepared to stand by and ignore,” Patten said.

A key protest leader who is a Christian, Joshua Wong, says China’s extradition plan has blown up in its face, reigniting the protest movement against dictatorial rule from China.

“Beijing and Carrie Lam transformed a whole generation of youngsters from normal citizen to dissidents. That’s the price that Beijing must pay,” Wong said.

US Secretary of State Mike Pompeo says Hong Kong will be on the agenda when President Donald Trump meets with Chinese President Xi Jinping at the G20 summit in 10 days.

Optimists will see in this protest victory of the students the hope that Hong Kong residents can stand up to China.  But pessimists have long predicted that democracy in Hong Kong would eventually die after the 1997 handover to China – it’s only a matter of time.