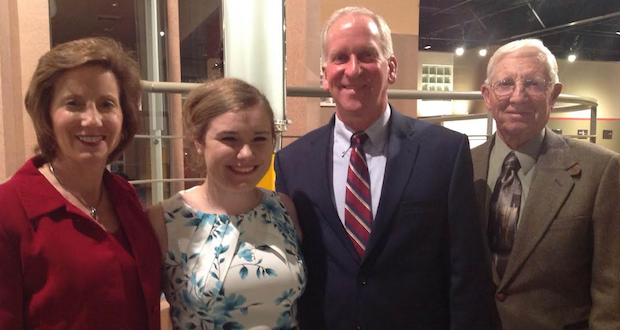 “God had a purpose for my life and gave me the most amazing family,” stated Tiffany Hartzler through tears as she shared her testimony at an Anniversary Gala of the LIGHT House on April 9 at the Armacost Museum in Grandview. Tiffany, a Junior at Harrisonville High School and former LIGHT House baby, is the adopted daughter of U.S. Congresswoman Vicky Hartzler. Congresswoman Hartzler served as Master of Ceremonies.

Tiffany’s story, and those of others, lent to a sense of purpose and achievement at the even. There, supporters and staff of The LIGHT House celebrated 30 years of service to girls in need across the Kansas City region.

“An unborn baby is not a potential but a life with great potential,” said Pastor Timothy Ek, development officer of The LIGHT House.

Providing a safe place for young ladies ages 12-21 to stay while pregnant, The LIGHT House offers a full array of services. These include parenting and nutrition classes, Bible studies and daily devotions, counseling and after-care support. Services to expectant mothers with children younger than 18 months are also provided.

According to Ek, the house accommodates 10 mothers and two babies at a time. One of the important ministries is that of helping these young women think about the decisions they’ve made and to build a better future.

The Light House opened its doors on July 1, 1985. “We had 15 girls that first day. Things got pretty hectic,” remembered Dr. Don Philgreen, medical director who has delivered the vast majority of the babies born at The LIGHT House.

Erin Simpson, the first Light House baby, and her adoptive mother Ann were acknowledged. Now a young woman, Erin took the time to thank Philgreen for bringing her safely into the world.

Also in attendance was Vidy Metzker who was a vibrant as ever. Many lives have been changed over the years through the ministry of Youth for Christ founded by Vidy and her late husband Al. It was their vision that laid the foundation for The LIGHT House.

The LIGHT House recently joined forces with Missouri Baptist Children’s Home. Together, their goal is to give a healthy alternative to abortion.

“The only answer for our troubles and woes is not another government program,” stated Russell Martin, president of the Missouri Baptist Children’s Home, “It is hearing and receiving the gospel of Jesus Christ and the living life He has called us to live.”

The Armacost Museum is where “great automobiles of the past and present come alive” and encompasses two floors covering 44,000 square feet. Cars and motorcycles dating from 1910 are part of collection. A nonprofit organization, it hosts 24 fundraisers for charitable organizations a year and is not open to the public.