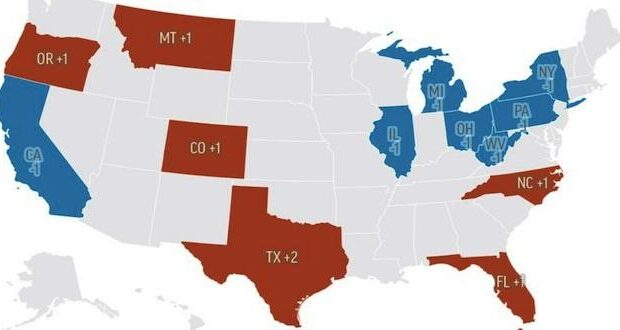 Here’s how the census will affect Missouri congressional seats

Census numbers released Tuesday show primarily Democrat states will lose seats in Congress while red states like Florida, Texas and Montana will gain seats. The numbers show that although much of the growth in the country is happening in the south and west, midwest states like Missouri are holding their own.

The Show-me-State will retain its eight U.S. House seats based on data released by the U.S. Census Bureau. The state’s metropolitan areas continue to show strong growth, especially in the state’s southwestern region, anchored by Springfield.

Missouri’s population rose 2.8 percent over the last 10 years to 6.1 million, in line with the Midwest average of 3.1 percent growth. The Midwest saw the slowest growth percentage over the past decade compared to other regions. The nation’s population overall grew to over 330 million retaining its rank as the world’s third most populous country.

The census data release from the federal government may not mean much for Missouri in terms of congressional seats, but the attention can now fully be on the legislative map drawing, said Yurij Rudensky, redistricting counsel in the Brennan Center’s Democracy Program.

“The question now is: Is this going to be a smooth process where the commissioners from the two parties work together or is it going to be another cycle punctuated with partisan gridlock, where the backup judicial panel has to take up the task?” he said.

In 2018, voters approved the creation of a non-partisan state demographer position to draw the legislative districts. The state auditor would pick a handful of people to submit to the Senate, where the majority and minority leaders would choose a demographer. If the two leaders could not agree, a demographer would be chosen through a lottery system.  But in November, more than 1.3 Missourians voted to repeal those so-called Clean Missouri changes. It reverted the system back to leaving it up to bipartisan commissions to draw the districts. But it also instituted a policy of “one person, one vote” for redistricting, which opponents have argued could exclude children or noncitizens.

“There will be opportunities for the public to provide input and comment,” Rudensky said. “Unlike decades past, there’s a lot more attention being paid to this issue and to other issues that pertain to democracy and voting. I know there are a lot of community organizations and other grassroots groups weighing in and trying to secure fair outcomes. We will see to what extent the commissions and the backup judicial panel pay attention.”

At one time Missouri was one of the most populated states in the nation. From 1903 to 1930 the state had a total of 16 Congressional districts and has been losing seats ever since.