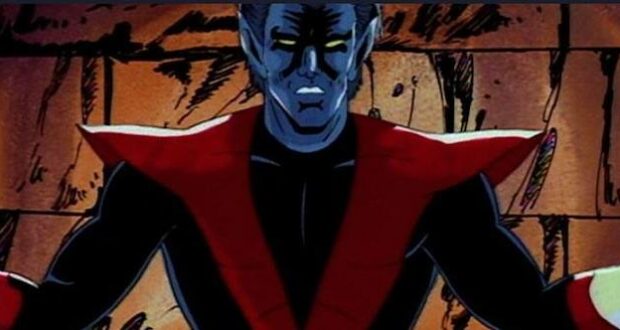 Included in Disney+’s extensive movie and TV library are classics such as the 1990s animated Marvel series, X-MEN.

While modern depictions of the team of mutant superheroes have become increasingly violent, such as LOGAN (2017), an episode from X-MEN: THE ANIMATED SERIES about the character named Nightcrawler did not shy away from a personal exploration of faith.

The 1995 episode, found in Season 4, Episode 1, depicts Nightcrawler as a monk.

“On holiday, Rogue, Gambit and Wolverine must protect Nightcrawler, a demonic-looking but kind-hearted monk, from a misled community,” the IMDb synopsis reads.

The episode’s writer, Len Uhley, offered more than simply a church-set piece for the superheroes to fight in and around.

“Don’t tell me about God,” Wolverine angrily remarks in the episode. “What kind of God would let man do this to me?”

“Our ability to understand God’s purpose is limited,” Nightcrawler responds. “But we take comfort in the fact that His love is limitless.”

Moreover, when the monastery is destroyed, Nightcrawler notes that faith is not a building but is found in someone’s heart.

“But it was only stone and mortar, the foundation God has built in our hearts can never be destroyed,” he says.

Nightcrawler then gives Wolverine a Bible and tells him that he underlined specific verses for the hardened superhero to look at later. The episode ends with Wolverine kneeling before God and praying in a church.

In a recent interview with RELEVANT Magazine, Uhley discussed the episode and his career working on classic animated projects like X-MEN, VeggieTales, and An American Tail. 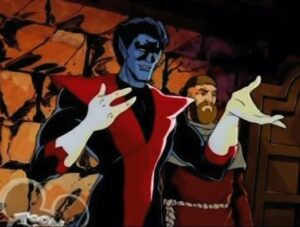 Nightcrawler explains that all have sinned.

“Here’s a secret about animation writers: Most of us — whatever genre we’re in: action-adventure, comedy, pre-school, or whatever — all write to entertain ourselves,” Uhley said. “Yes, it’s a different kind of writing than working on an hour-long drama or a network sitcom but basically, at the end of the day, you want to be writing something that is entertaining for everyone who watches it. That includes the parents as well as the children.

“I think kids get a lot more than we give them credit for getting,” he added.

Uhley said that a good story includes reflections on the human condition, not just action.

“Anybody who really wants to be a writer is foolish enough to think that other people will identify with what you have to say about the human condition. This is what they were doing in the X-Men series. They were doing these wonderful little half-hour dramas or melodramas or whatever you want to call them. It wasn’t just about things going boom,” he said. “It was about feelings and interpersonal relationships. And, yes, things were also exploding occasionally.”

“Obviously, with the X-Men, themes of the ostracization of oppressed minority groups were key to the stories. I didn’t really understand what I was seeing when I first watched them, but those lessons stuck with me,” he added.

Uhley said that the story editor Eric Lewald would cast writers for each episode. According to Uhley, the entire team agreed to explore faith in an open manner for the “Nightcrawler” episode.

“I was not very familiar with the X-Men, but the thing that Eric Lewald would do was cast the writers. He knew that I was interested in explorations of faith and the longing we all have to understand our place in the world. So when we finally got the go-ahead to do Nightcrawler, he said, let’s get Len to do that one,” he revealed.

“So I was very fortunate. Today, when all of us attend these conventions and we appear on panels, fans are very kind to say how much they enjoyed that episode. It speaks to something that a lot of folks experience,” he added. “We’re all searching for meaning. I just happen to have an unusual opportunity to explore that. It was probably the first time it was discussed in a mainstream animated series.

“There were other animated shows that dealt with faith prior to that. Davey and Goliath was on Sunday mornings and later on, I worked on some other religious shows, SUPERBOOK and FRIENDS AND HEROES in the U.K. Certainly, VEGGIETALES is a wonderful property, and I got a chance to write for that more recently. But X-Men: the Animated Series was the first time the topic ever got any kind of an airing in a superhero show.”

Uhley said that the primary goal of the episode was to explore pain and suffering through the contrast between Wolverine’s outlook on life and Nightcrawler’s perspective.

“Just to do a little backstory on Wolverine the character: This is a guy who, at the time of the series, was 95 years old. As he says in the cartoon, he’s seen too much, he’s lived too long; he’s a bitter fellow,” Uhley explains. “He may have had faith of one sort or another at one point, but it got beaten out of him by all of the horrible things that he’s seen and all of the horrible stuff that was done to him. Remember, he was treated as a lab specimen — that’s how he got those claws. Not a sunny disposition.”

“If anybody has a reason to be bitter, it’s Nightcrawler. He looks like the devil, and what a curse that would be for most of us,” he added. “Yet he, among all the characters in the Marvel Universe, has the most profound faith! Wow. How did he get to that point? It’s inspiring and it’s a little unsettling for somebody with the perspective of Wolverine, but it resonates with him.

“That’s the nice thing about this episode. Even though it’s only a twenty-two-minute story and there’s guns going off and libraries catching fire, you’ve still got an opportunity to have a couple of conversations about what each person feels about their world.”

Uhley added that the focus on faith was a team effort, encouraged by the overseer of the series, Fox Kids executive Sydney Iwanter.

“When Eric and I started on the episode, we were being cautious,” he confessed. “The original version was this big adventure with Nazis and gold and wild boars. It was a mishmash of typical superhero adventure stuff. Sidney, to his credit, said ‘OK, look, quit doing all of this. I want to hear about a loving, giving God’, and he was very adamant about it.”

Previous: Lawsuit accuses Springfield schools of avoiding scrutiny of curriculum and training
Next: Pastors question if they’ll unplug from online services after pandemic