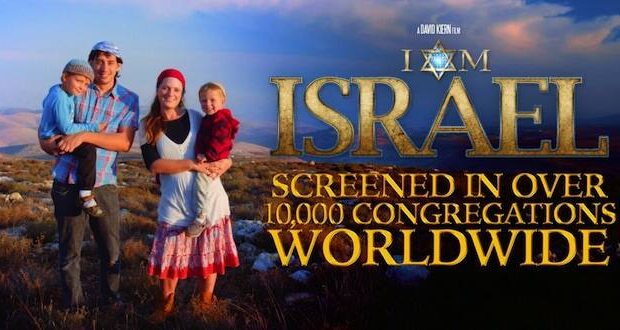 A ground-breaking short film, I Am Israel, is receiving praise in over 10,000 church congregations around the world. The movie is now being made available for viewing by groups or churches for free or in private viewing in homes via download or DVD.

The award-winning film has been praised by everyone from Glenn Beck, CBN, and the 700 Club to The Jerusalem Post – Israel’s leading newspaper. It provides viewers with an intimate look at the lives of those who live in the Land and about the relationship between Jewish people and the land of Israel.

VISIT: Join Metro Voice for a tour of the Holy Land in 2021

During the course of the film, we are introduced to five Israeli citizens: Israel Defense Force veteran and Golan Heights cowboy, Jonathan Rosenburg; Batya Selah, a Jewish homemaker who reads Scripture to her sons and shows them the different places mentioned in the text; Alex Levin, a painter who has a deep love for Jerusalem; Daniella Avraham, a tour guide who shows visitors biblical places in the Old City; and a vineyard owner, Yaakov Berg,  whose family drilled holes into the rocky ground to plant the flourishing grapevines we see in Israel today.

The film presents a very positive view of Israel. The focus is primarily on biblical sites, and we do not see how Israeli citizens have been affected by the ongoing conflict with the Palestinians. The Israelis shown in the film love God, read the Tanakh, teach their children the Scriptures, and celebrate the Sabbath. Many of them mention Christians in a positive light: Levin’s artwork is featured in churches around the world; Berg’s vineyards are harvested by Christian volunteers; and Avraham sees Christian tourists visiting holy sites in Jerusalem as a fulfillment of Isaiah 56:7, in which God says, “…My house will be called a house of prayer for all the peoples.”

The film offers a small glimpse of the warfare Israel faces, though not with footage of anxious Israelis running to bomb shelters. While we do see some IDF soldiers during Rosenburg’s segment, it is the eerie, dark shots of landscapes set against Rhys-Davies’ narration that paint the picture of war. We are reminded that if Israel were to give up her land—or if her land is taken by force—neither Christians nor Jewish people will be allowed to visit the biblical sites.

The film ends on an exciting note, as it features quick soundbite interviews with well-known Israeli public figures including Member of Knesset Rabbi Yehuda Glick and author David Rubin. They share how surprising and awe-inspiring it is that Israel’s population has grown so much in such a short span of time, that the land is flourishing, and that there seems to be change in the air—an anticipation of something that will happen soon.

Ultimately, the film accomplishes what it sets out to do. It reminds the audience that God made an everlasting covenant with Abraham, that prophecies about Israel are coming true, and that we need to stand with Israel against those who want to destroy her. It will give people a greater desire to visit the Holy Land if they have not already done so, and for those who are passionate about Jewish evangelism, they will feel more inspired to pray for the peace of Jerusalem and the salvation of the chosen people.

You can learn more about this short film at iamisraelfilm.com.