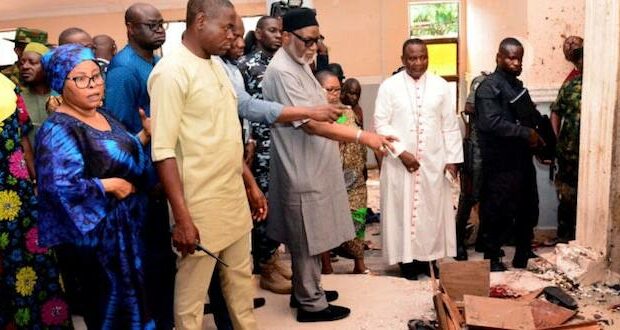 Persecuted Christians In Nigeria long for return of Donald Trump

Donald Trump may be facing headwinds within the Republican Party after the midterm elections, but in the killing fields of Nigeria, embattled Christians long for his return.

“Since [Trump] left office, there is no one speaking for us anymore,” says a member of the Nigerian House of Representatives, Solomon Maren.

“The American government under Trump made sure religious freedom was guaranteed in Nigeria,” said Maren, who represents a district of Plateau state in the Nigerian House of Representatives.

Maren and other opinion leaders bemoan the fact that the Biden administration does not acknowledge religious freedom is being violated in Nigeria.

More than 1,000 Nigerians were murdered for their faith in the first three months of 2022, and the nation witnesses more such deaths than the rest of the world combined, according to Open Doors, a human rights NGO.

Yet, the U.S. Department of State in November 2021 dropped Nigeria from its religious freedom watch list amid criticisms by global rights activists.

Nigeria was listed as a Country of Particular Concern (CPC) in October 2020 by the Trump administration due to continued religious violations.

A massacre in the town of Maikatako, 45 miles south of Jos, unfolded hours after President Muhammadu Buhari attended a ceremony to defer the 2023 presidential campaign of the ruling All Progressives Congress party in Jos.

He added: “There were killings in March 2018 when Buhari visited and the Fulani attacked communities in Bokkos, Barkin Ladi, and Bassa [counties]. Many more instances exist in the past that suggest the terrorists want to prove they have the president’s backing and no one can challenge them,” said Maren.

READ: Why are you killing Christians, Trump asked Nigerian President

“This is a systematic religious cleansing and annihilation of indigenous Christians toward land grab,” Maren said.

On Nov. 15, approximately 300 terrorists made a complex attack on the market town of Maikatako, killing 11 people. Hours later on the same day, another attack in the adjoining Folloh village—located one mile away—left one person dead, he added.

The attack in Maikatako saw at least 10 people injured and half of the village’s 50 brick houses razed, Maren said.

Residents told The Epoch Times the terrorists were armed with assault rifles and streamed into the village from bush located two miles north of Folloh, and one mile from Maikatako.

“I would have said the United States should impose sanctions on Buhari for supervising the killings, but the people whom we are supposed to look up to were the same people who came to Nigeria and removed the country from the list of countries to watch for religious violations,” Maren lamented.

His colleague from Benue state, Mark Gbilla concurred: “More than anybody else, the United States should be in possession of all the intelligence regarding the attacks [in Nigeria].”

Gbilla, who represents Gwer constituency at the House of Reps., told The Epoch Times in a phone call, “It leaves one to be concerned about the intentions of the [Biden’s] government.”

“Since the United States removed Nigeria from the list of countries of particular concern, religious attacks have tripled,” said Rev. Joseph Hayab, the northern vice chairman of the Christian Association of Nigeria (CAN), to The Epoch Times.

Between January and October 2022, at least 4,020 Christians were killed in Nigeria by Islamic extremists, according to International Society for Civil Liberties and Rule of Law (Intersociety), a local monitoring group.

This means as many as 420 Nigerian Christians were murdered each month for their faith—a rise from 372 deaths reported by Open Doors International last year.

“The actual death toll might be a lot higher,” said Hayab, who also heads the Baptist Church in Kaduna state.

Hayab met with U.S. Secretary of State Anthony Blinken when he visited Nigeria in November 2021  and expressed his objection to the dropping of Nigeria’s CPC label.

“Trump as a person has his weaknesses but we have to give it to him for standing for religious freedom,” said Simon Mwadkwon, another member of the Nigerian House of Representatives who spoke to The Epoch Times.

“America has assumed the status of the world police, making sure that things go right. A credible [U.S.] president should be seen to have a human heart,” said Mwadkwon who represents Barkin Ladi/Riyom constituency in the Nigerian parliament.

Between Nov. 16–23, a series of armed attacks in the states of Plateau, Benue, and Enugu killed at least 36 Christians according to officials and media reports.

One of the latest attacks by Fulani terrorists targeted a farming village 45 miles south of Jos on Nov. 23.

At least nine people, including toddlers, were shot and hacked to death in Serr village located in the east of the Bokkos county, according to a former Speaker of the Plateau state House of Assembly, Titus Alams, who was born there.

More than 20 other residents were injured in the evening raid on the hilltop town that displaced about 225 of the 250 residents, said Alams to The Epoch Times.

“As usual, they burned many houses, cars, motorcycles, and food barns belonging to the residents,” said Alams in a phone interview.

According to witnesses an estimated 200 to 300 armed terrorists stormed the village shouting “Allahu’akbar” (God is great), said Rev. Iliya Mapak, a local pastor who witnessed the attack.

The terrorists overpowered Mapak’s team of 20 civilian volunteers who attempted to stop the invasion with their hunting rifles and homemade single-shot guns, according to Mapak.

Six of the defense volunteers were among nine bodies recovered from different locations in the town when the military arrived minutes after the terrorists had disappeared, he said.

The military was stationed at an outpost five miles from the village.

“The American government is really supposed to show that she cares, she does not want people to die, she wants to defend human rights and human rights defense should not be just rhetoric. It should be an action,” said Hayab.