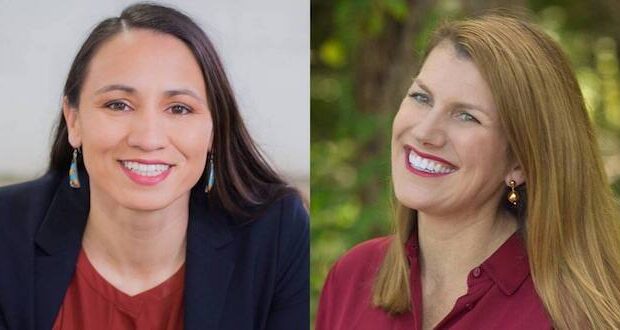 Davids, left, is being challenged by Republican Amanda Adkins.

Conservatives are looking for a clean sweep of all Kansas House seats in the 2022 midterm elections and one race could determine if Nancy Pelosi keeps her speaker position.

After the 2020 Census, the state’s districts were redrawn and even upheld by the State’s liberal Supreme Court after the map was challenged in court by Democrats.

For her part, Davids has been an ineffectual representative for the district but reliable for Democrats. She regularly gives Democrat House Speaker the votes to pass some of the most radical legislation in history, say opponents, but at home, works to distance herself from Pelosi. Her low profile has been helped by the region’s media outlets which have yet to criticize a single vote and even covered up her eligibility to even run for the seat.

The 3rd district has been labeled as one of the 36 most competitive congressional midterm races, according to Cook Political Report. Davids’ chance of holding on to her seat is now labeled as a “toss-up.”

Before redistricting, the Cook Political Report Partisan Voting Index rated CD 3 as D+1. It has now revised its rating to R+1.

Adkins, a former Kansas Republican state committee chair who lost to Davids by 10 percentage points in 2020, easily powered past party rivals in the Aug. 2 GOP primary to win a rematch with Davids.

But Davids, a self-proclaimed lesbian and former mixed martial arts (MMA) professional fighter, is attempting to hold on with a war chest funded by House Speaker Nancy Pelosi and what has become known as “the squad” comprised of Reps. Ilhan Omar of Minnesota, Alexandria Ocasio-Cortez of New York, Rashida Tlaib of Michigan and Ayanna Pressley of Massachusetts.

According to OpenSecrets.org, Davids’ July 13 FEC campaign filing said she had raised nearly $4.7 million—nearly twice Adkins—spent more than $1.684 million, and had nearly $3.486 million in cash on hand.

Davids is currently pouring millions into television ad buys. Adkins, for her part, is welcoming in hundreds of thousands of new conservative voters to the redrawn district.

Previous: Judge halts FBI investigation, siding with Trump for a special master over documents
Next: Museum of the Bible returns manuscript that was stolen from monastery during WWI