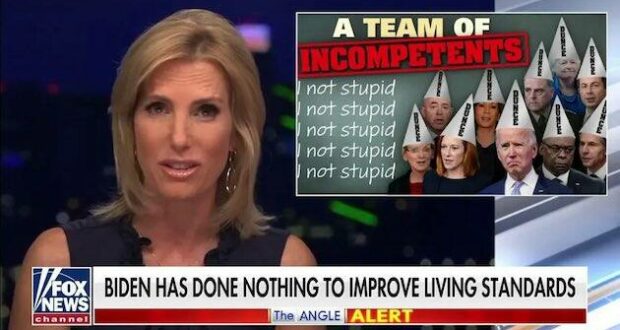 As even some left-leaning political commentators question decision-making in the White House, Fox News host Laura Ingraham says the problem endangers the country.  The best-selling author and host of the Ingraham Angle made her comments this week after continuing conflicting actions announced by the Biden administration.

“America is truly in danger, under a president who is physically and mentally deteriorating before our eyes … real chaos is unfolding,” she said. In contrast, “[The media] worked overtime to brand the Trump White House as out-of-control from day one. Yet when the media cried ‘chaos,’ what they were really expressing was fear.

“Why fear? They knew Trump would do what he promised during the campaign — take the country in a new populist direction … in other words, a gut punch to the old establishment. Unlike so many others, he was unwilling to play the old game of media pattycake in exchange for more favorable coverage.”

Ingraham slammed Vice President Kamala Harris: “Chaos is inevitable when you assemble a team of incompetents — people chosen not because they were the most experienced for the job but because they checked the Diversity, Equity and Inclusion box.”

CNN reported “entrenched dysfunction and lack of focus” in Harris’ wing of the White House. The relationships between the Biden and Harris offices reportedly are strained, despite the cordial relationship between the vice president and the president.

Following the report, Biden’s officials sent out tweets praising Harris. “For anyone who needs to hear it [Harris] is not only a vital partner to [Biden] but a bold leader who has taken on key, important challenges facing the country — from voting rights to addressing root causes of migration to expanding broadband.”

Ingraham said there was literally … no human being on earth who right now is thinking, ‘Thank God, Kamala is in there working with Biden — she’s a bold leader!’”

Ingraham went on to criticize John Kerry, who serves as Biden’s special presidential envoy for climate; Secretary of State Tony Blinken; and Treasury Secretary Janet Yellen for being the other key players in the “incompetence” team.

“The internal chaos might not be reported on, but the voters know what’s happening,” she said. “The havoc the Biden administration has caused in 10 short months is astounding. But he had a lot of help from the most incompetent White House team in history.”