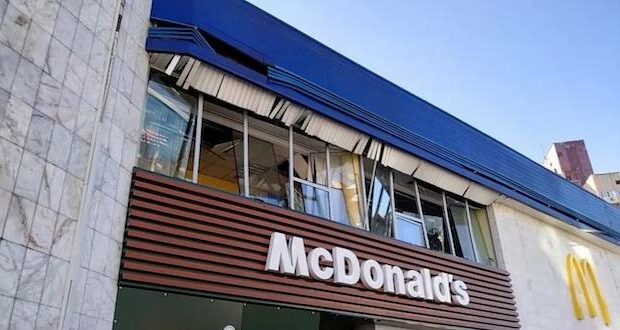 A damaged McDonalds in Ukraine will need repair before reopening to the public.

McDonald’s will reopen some of its restaurants in Ukraine beginning this week.

The announcement comes after it assessed the locations destroyed by Russian missiles and mortars, and is a sign of hope in Kyiv where the first restaurants will open in days.

It was one of the few companies that committed paying the salaries of more than 10,000 employees while its restaurants remained closed. The company has completely pulled out of Russia.

Three locations in Kyiv will reopen on Sept. 20, but only for delivery, Alesya Mudzhyri, McDonald’s head of communications in Ukraine, wrote in a Facebook post.

The dining facilities, express windows, and McDrive will open in October, with new safety protocols to keep employees safe, she said.

“Restaurants will be open from 9:00 a.m. to 9:00 p.m. and will close during the air raid alert to allow employees and patrons to evacuate to the nearest shelter. At the same time, the team quickly issues already paid orders while stopping production processes and turning off equipment before closing,” said Mudzhyri.

She also said that the resumption of operations in Kyiv and in the west of Ukraine are expected take place in stages over the course of two months. Many locations were destroyed or badly damaged and are just now being repaired. Others will need to be completely rebuilt. See video below:

“In about a week, seven more establishments in Kyiv will resume work, and later the rest of the restaurants will open in the capital and in various cities in the west of the country.”

McDonald’s promised in August that it would begin reopening its restaurants in Kyiv and western Ukraine, in response to its employees in that country wanted to return to work despite the war.

“We’ve spoken extensively to our employees, who have expressed a strong desire to return to work and see our restaurants in Ukraine reopen, where it is safe and responsible to do so,” said Paul Pomroy, a vice president for international operations at McDonald’s, in a statement.

“In recent months, the belief that this would support a small but important sense of normalcy has grown stronger,” he said.

Pomroy said that McDonald’s would gradually reopen its restaurants to “support the local economy and the Ukrainian people,” after discussions with the Ukrainian government and local suppliers.