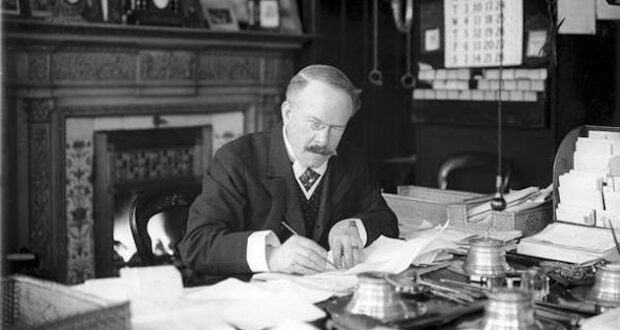 On this evening, September 19, 1905, sixty-year-old “Dr.” Thomas Barnardo complained that his head felt heavy. Asking his wife to allow him to rest it on her for a moment, he slipped out of this life. About 1,500 boys appeared at his funeral along with many poor people and rough men who sobbed openly. For Thomas had been a friend to neglected children. At his death, about 8,000 were living in homes he had founded.

Born in Ireland, Thomas was a restless boy who bored easily and would not stick to his lessons. Failing his exams, he had to leave school at sixteen and was apprenticed to a wine merchant. That year he was converted to evangelical Christianity. At once, he began visiting homes telling others about the Gospel and teaching the Bible in “ragged schools” (charity schools for impoverished children). He joined the Plymouth Brethren.

Hearing about the work of Hudson Taylor in China, he was fired with enthusiasm for it and found the means to attend medical school in London so that he could prepare for the mission field. While living near the hospital, he continued slum work. His message was not always welcomed: once he had a couple of his ribs broken by opponents and at other times he was roughed up in other ways.

But Thomas was persistent. Once again he donated time to work in a ragged school. It was after one evening’s lesson that he met (according to his account) a young fellow named Jim Jarvis who was evidently reluctant to leave. It turned out that Jim had no home. “Well, but where did you sleep last night?”

“Down in Whitechapel, sir, along the Haymarket in one of them carts as is filled with hay; and I met a chap and he telled me to come here to school, as perhaps you’d let me lie near the fire all night.”

Although he still worked toward his goal of becoming a missionary in China, Thomas increased the scope of his work among London’s neglected youth. In response to an article he wrote, he was offered money to continue his London work. Eventually he gave up the China plan and developed his successful East End Juvenile Mission among neglected young people.

This included schools, meal programs, a job agency, homes for boys, homes for girls, and homes for the feeble-minded. An innovative marketer, Thomas came up with original ways to raise funds. One was before and after photographs of every child who entered his homes. These were printed and sold in packs. Another was to form a league of middle class youth to raise contributions for his schemes. Generally his ideas outran his funding, but he would not obey the limits placed on him by his boards. However, he knew how to milk stories like Jim’s for all they were worth. The details of his stories changed according to his needs.

Not all of Thomas’ methods would stand muster today. For example, he sent large numbers of children to families and schools Canada and Australia. Although he meant well, many found it difficult to adjust.

Wrapped up in his noble cause and always in need of more funds to spread the work, Thomas left himself open to charges of dishonesty, though courts found him innocent of charges. They seem to have barely fazed him, and he struggled for the poor until the day of his death.

Thousands owed a better existence to him.

Previous: Christian colleges in Kansas sign universal transfer agreement
Next: McDonald’s to reopen in Ukraine but some locations destroyed