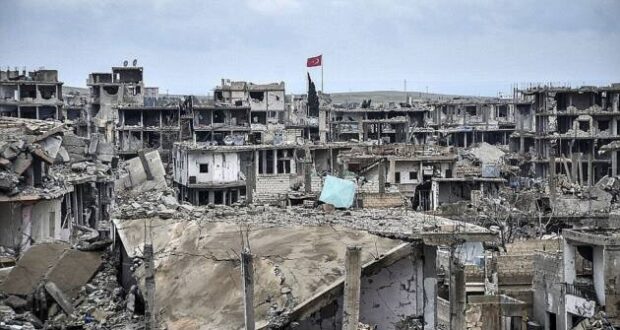 Ever since former President Barack Obama called ISIS the “JV team,” the terrorist organization has decimated countless cities and villages across the Middle East. Now, a Christin ministry aims to rebuild the lives of Christians, Muslims and Yazidis–one community at a time.

Read: Death of leader is big blow to ISIS

When ISIS fighters came across the rich Christian history of Batnaya, Northern Iraq, they were incensed. Hell-bent on ridding the Assyrian town of its historic Christian heritage, the terrorists defaced churches, decapitated statues and smashed up any and every religious symbol they could lay their hands on.

“Slaves of the Cross, we will kill you all. This is Islamic territory. You do not belong here,” the militants wrote across one of the church buildings.

Now three years on from ISIS being defeated in the region, an extensive restoration program organized in partnership with Aid to the Church in Need (ACN) is set to bring hope back to the small town.

The charitable group has been tasked with restoring the parish church of St Kyriakos, along with the nearby Chapel of the Immaculate Conception. They will also rebuild the flattened St Oraha’s Dominican Convent and kindergarten. Wonderfully, the daycare center will become fully functional once again, catering for some 125 children.

The scheme won’t stop there — ACN’s restoration project is set to cover some 13 Daesh-occupied Christian towns and villages across the Nineveh Plains.

In response to the exciting announcement, ACN Middle East projects director, Father Andrzej Halemba, described the program as “a new and courageous step forward to secure the future of Batnaya.”

“Even if the situation is not very clear, we see the importance of a sign of hope,” he added. “ACN is determined to help the Christians to stay. Our task is to stand by the people who would like to come back.”

Within eight months of work beginning on Batnaya to restore its ruined civic infrastructure, some 300 people have returned. Church leaders estimate that hundreds more will soon return after being displaced in neighboring towns and villages for the past few years.

The rebuilding process will not be a straightforward task, however, as the villages found themselves on the frontline of fighting between ISIS and coalition forces.

“Widespread booby-trapping has delayed work which could only begin after a huge de-ordnance program had been completed,” ACN highlighted. “Restoration has been further hampered by the extensive tunnels dug under the village by captives of Daesh who went underground to escape bombardment.”

While the physical restoration will not be easy, for many of the region’s residents, getting over the trauma of the ISIS years will be much tougher.

“For many Christians, returning has meant overcoming memories of Daesh daubing homes with ‘n’ for ‘Nazarene’ (Christian) and demands to pay jizya Islamic tax, convert to Islam or face execution by the sword,” ACN noted.

Still, with time, the project is sure to entice locals back to their homes. As ACN urged, the “resettlement of Batnaya is seen as crucial for the recovery of the Christian presence in the Nineveh Plains.”

Do pray for all the teams involved in this important project, along with all those who are returning home. May God protect and heal them as they claim back their land and restore their religious traditions.

Previous: Will Netanyahu survive Monday’s election?
Next: Kansas City Chiefs punter Dustin Colquitt sees God at work ‘in all aspects’ of his life