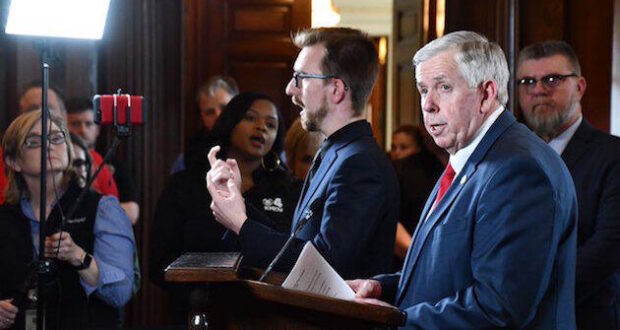 Missouri Governor Mike Parson addresses Capitol reporters in Jefferson City, after he declared a state of emergency in Missouri for coronavirus (March 13, 2020 photo courtesy of the Governor’s office)

The proposed legislation provides liability protection relating to a declared state of emergency for health care providers, churches, schools, businesses, nonprofit organizations and manufacturers among others.

“None of these groups should be penalized for their efforts to respond to a declared state of emergency,” he said. “They must be able to continue operating and serving the public without risk of unnecessary and frivolous claims.”

“We want to make sure we give relief to the hospitals, the schools, the business people that’s been out there trying to help everybody all through the COVID,” Parson told “The Missouri Times.” “We don’t want to subject them to lawsuits who are just trying to save people’s lives. We’re going to try to put something in place to protect them.”

As reported by Metro Voice, lawmakers are already back in the Capitol to address the supplemental budget allocating federal CARES Act funding. The House approved the package Tuesday, and the Senate is expected to take it up later this month. Parson said the plan would be to expand the ongoing session to include COVID liability issues as opposed to calling a different one — which would be the third this year.

“The cost of this pandemic has been dire, not only in the lives that have been lost but also with the massive disruption we have seen for Missourians and Missouri businesses in all parts of the state,” he said. “If we are to give our state the best chance to recover from this ongoing pandemic, it’s imperative that we take on these issues sooner rather than later.”

Parson said there still are a few details to work out but an official announcement about the expansion should be coming in the next couple of days. He previously told reporters he was open to a COVID liability plan that wouldn’t take several months for lawmakers to approve.

The Missouri Chamber of Commerce and Industry and GOP Sen. Cindy O’Laughlin also have backed addressing COVID liability issues. The chamber said a “temporary, limited immunity from liability should be available if businesses follow government guidance on public health measures.”

The move quickly drew criticism from Brett Emison, immediate past president of the Missouri Association of Trial Attorneys (MATA).

Trial attorneys, who would be set to make billions off lawsuits are furious.

“Our lawmakers should enacting policies to protect the public against spreading the virus; not protecting irresponsible businesses from accountability when they fail to follow recommended guidelines,” stated Brett Emison, immediate past president of the Missouri Association of Trial Attorney.