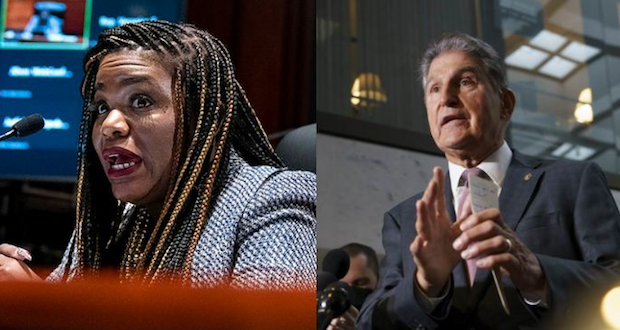 Cori Bush, a freshman Democratic representative from St. Louis, is quickly making a name for herself as a member of the liberal Squad. She unloaded on Sen. Joe Manchin this week after he explained earlier in the day that he was opposed to Biden’s massive social spending bill because it would cause an “economic crisis.”

“Joe Manchin does not get to dictate the future of our country,” Bush said. “I do not trust his assessment of what our communities need the most. I trust the parents in my district who can’t get to their shift without childcare. I trust the scientists who have shown us what our future will look like if we fail to meaningfully address the climate crisis. I trust the patients and doctors crying out for comprehensive health coverage for every person in America.”

Bush blamed the Senate for holding up the process to get the reconciliation bill passed and then effectively claimed that Manchin was a racist for opposing the bill.

“Joe Manchin’s opposition to the Build Back Better Act is anti-black, anti-child, anti-woman and anti-immigrant,” she said. “When we talk about transformative change, we are talking about a bill that will benefit black, brown and Indigenous communities. Those same communities are overwhelmingly excluded from the bipartisan infrastructure bill. We cannot leave anyone behind. Sen. Manchin must support the Build Back Better Act.”

Manchin suggested that members of Congress do not really know what they are voting for or the impact that it will have on the country.

“For example, how can I in good conscience vote for a bill that proposes massive expansion to social programs when vital programs like Social Security and Medicare faces insolvency and benefits could start being reduced as soon as 2026 in Medicare and 2033 in Social Security? How does that make sense?” Manchin said. “And I don’t think it does. Meanwhile, elected leaders continue to ignore exploding inflation, that our national debt continues to grow and interest payments on the debt will start to rapidly increase when the Fed has to start raising interest rates to try to slow down this runaway inflation.”

Manchin also warned that as “the real details outline and the basic framework are released, what I see are shell games, budgets gimmicks that make the real cost of the so-called $1.75 trillion bill estimated to be almost twice that amount if the full-time has run out, if you extended it permanently and that we haven’t even spoken about.”