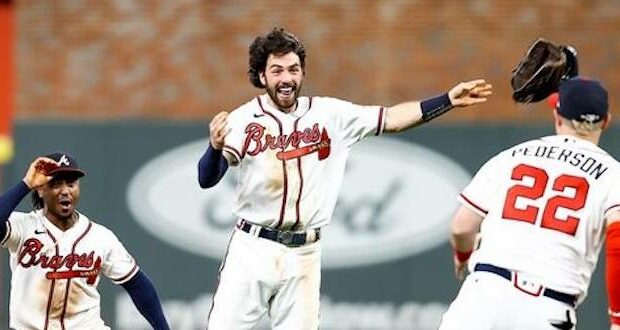 “Destiny, I guess,” Swanson said. “The good Lord has blessed me with so much. I wouldn’t be here without him. Just the peace that he gives me, it’s remarkable. Especially in moments like this, you can never go wrong trusting in that. Like I said, I’m just so thankful to be here, truly.”

Swanson, who plays shortstop, told a Fox TV audience that his Christian faith kept him grounded when he was traded from Arizona to Atlanta in in 2015, only six months after being selected by the Diamondbacks as the No. 1 overall pick in the Major League Baseball draft.

“I’m just so thankful to be here,” a smiling Swanson said. “I really can’t say it enough. Being traded over here, at the time, I didn’t understand it. But God’s always got a plan. And if I’ve learned one thing is having faith in that plan will never fail you. And it’s one of the best things that’s ever happened to me.”

Swanson, who grew up in Georgia and played college baseball at Vanderbilt University, said he’s enjoyed living in his home state.

“Being here, being able to see my family as much as I do, watching my nephews grow up. If I didn’t get traded here, I would never have ever met Mallory,” he said of girlfriend Mallory Pugh, a professional soccer player. “I mean, you just start stacking things on top of each other, and it’s truly a blessing to be here in this city. I love this city. I’m a diehard Falcons fan. I’m a diehard Hawks fan. And obviously, I’m a diehard Braves fan.”

He encourages everyone to get closer to God by spending more time in his presence.

“If anything, the lesson that I’ve learned was that you can’t go wrong trusting and growing closer to God,” Swanson said. “Whatever way that works for you is what works for you. But spend time with God. Legitimately spend time in the words that he wrote through people that were on this earth. Spend time in prayer and meditation and silence. Do these things to grow near to him.”