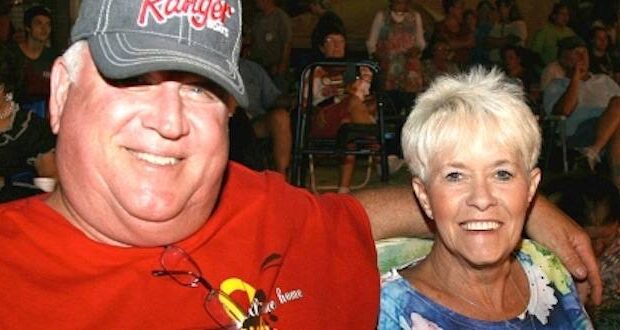 A Missouri woman has shared that she was declared dead, went to heaven and came back to tell her story. She was recently interviewed by Christian broadcaster CBN and local media on her near-death experience.

Last September, Charlotte Holmes was admitted to Cox South Hospital in Springfield, Mo. after she went for a routine checkup with her cardiologist and was sent directly to the hospital.  Her blood pressure was recorded at 234 / 134.  She was there with her husband of 48 years, Danny.

“I’ve always had trouble with my blood pressure and I’ve been in the hospital two or three times before when they put me on IV medication to bring it down,” she told the Ozark County Times.

This time was different.

“That time, in September, I’d been there three days, and I was hooked up to all the heart monitors. They had just given me a sponge bath in my bed, and they were putting a clean hospital gown on me when it happened. I can’t remember anything about that moment, but Danny said I just fell over, and one of the nurses said, ‘Oh my gosh. She’s not breathing.’”

“I came above my body, and when I was above my body I looked down and I could see 12 nurses,” she said. “I could see the person on top of me doing chest compressions. I did not fear, I did not have any of that. I just felt contented. It was amazing.”

She said what she heard and saw next was more beautiful than she ever imagined.

“All of a sudden I opened my eyes and I knew, I knew I was home,” Holmes said. “I knew that I had gone to my heavenly home. And almost immediately, from what I could tell, I heard music.

“I’d seen the trees, and the flowers and everything and it was swaying with the music, the praise of the angels and the people there. I smelled the most beautiful flowers I have ever smelled in my life. There are no flowers on this earth that smell like that.”

Holmes said she saw family and friends who had passed away.

“There were so many more behind them, all my friends, all my family, the saints of old,” she said. “I looked, and there stood my family. My mom, my dad, my sister, my best friend. They looked young. They didn’t have glasses. My cousin that had had a leg cut off had both legs. They looked like they were in their thirties.”

Holmes said she knew immediately that she needed to come back. She has since made it her mission to share her experience.

“Heaven is more than what we even think,” she said. “Heaven is more beautiful than what you can imagine. And, praise God, he’s given us a chance to share our stories, to share God’s love. We’ve got to bring home as many as we can.”

Charlotte was in the hospital another couple of weeks, and during that time, “I couldn’t stop talking about it,” she told the Times. Her husband and others present at the hospital that day also recount her waking and immediately asking if they had smelled the flowers.

“I’ve got this burning in my life and my soul. I got to see something so amazing, and I’ve just got to tell people about it. Heaven is a million times better than you can imagine. I stop people in the grocery store. I even stopped my mailman and told him. I’m not bashful. I want to share this story wherever I can.”

Previous: Missouri attorney general questions decision to expand mail-in voting
Next: DOJ warns California over closing churches: “there is no pandemic exception to the U.S. Constitution”