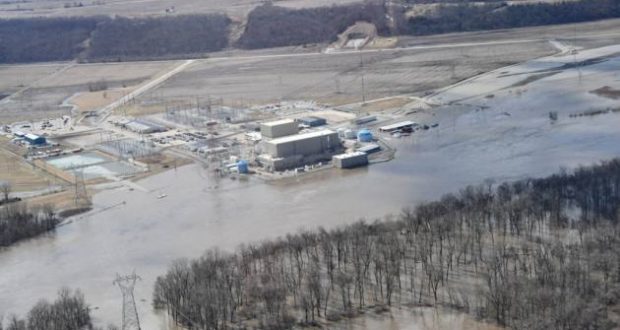 A view of the flooding damage in northwest Missouri (March 15, 2019 photo courtesy of Governor Parson’s office)

The state of Missouri has asked the Federal Emergency Management Agency (FEMA) to expand last week’s federal disaster declaration for the state in two ways. Governor Mike Parson’s office is requesting FEMA consider making assistance available to residents and businesses in 21 additional counties and provide help to public agencies in 68 counties with repairs to roads, bridges, and other damaged infrastructure.

In the request, SEMA said that joint FEMA, SEMA, and local damage assessment teams had identified more than $26 million in infrastructure damage and emergency response costs experienced by local jurisdictions. SEMA also said the state of Missouri had damage and expenses totaling more than $23 million due to the flooding and storms.

“Many Missouri communities have been hit hard this year by flooding and severe storms that have damaged and destroyed homes and businesses. Public agencies have also been impacted by severe damage to roads, bridges, and public buildings,” Parson said. “Expanding the disaster declaration is warranted due to the extent of the damage across these additional counties and the high cost of repairs.”

SEMA said that while the 21 counties requested today were denied assistance in the July 9 federal disaster declaration, additional information gathered as floodwaters receded increased the need for support. SEMA said earlier assessments, conducted by helicopter due to the flooding, did not capture all of the damage to homes. SEMA asked that FEMA re-evaluate the new damage information and that damage assessors revisit Clark, Callaway, Cooper, Gasconade, Howard, Lewis, Saline, St. Louis and Ste. Genevieve counties.

SEMA also requested that joint damage assessments for individual assistance be conducted for the first time related to this disaster in four counties: Cape Girardeau, Marion, Newton and McDonald counties. According to Parson’s office, this move is being done with the expectation that SEMA will later request for these counties to also be included in the disaster declaration.

Individual assistance would allow eligible residents to seek federal help for temporary housing, housing repairs, replacement of damaged belongings, vehicles, and other qualifying expenses as a result of this year’s severe flooding and storms.

To register for FEMA assistance, go to www.DisasterAssistance.gov or register by phone by calling 800-621-FEMA (3362). Telephone registration is available 7 a.m. – 10 p.m., seven days a week.