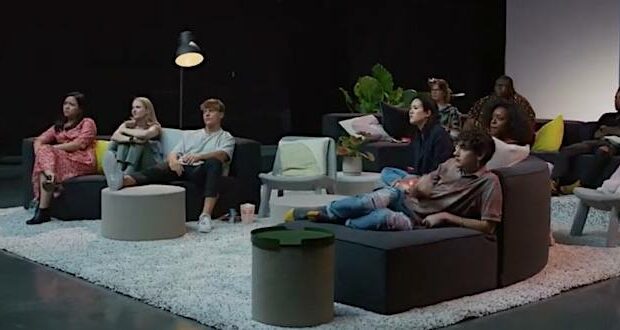 The makers of the popular Jesus series “The Chosen” got heartwarming reactions of the show from Generation Z in a recent experiment.

Much has been made of the fact that Gen Z — affectionately known as “zoomers” — the generation after millennials, is the least likely generation so far to identify with any organized religion. This has raised deep concerns by religious people in previous generations who see this as a sign of religious and cultural decline, and it has prompted questions of what religious engagement with culture will look like in not only a non-Christian but a largely post-Christian culture.

The team behind “The Chosen” has now done its own experiment with engaging the next generation and turned it into a documentary.

“Unfiltered: Gen Z Reacts To The Chosen” follows nine people in Gen Z from different walks of life and beliefs who were hand-picked to go to Utah and binge-watch the first season of “The Chosen” while the creative team filmed their reactions. The participants had not been told what the show was or anything about it prior to watching it.

The documentary does a good job of letting the audience get invested in the participants’ stories. They’re authentic, vulnerable, charming, funny and very open to the experience. Most of them have had negative childhood experiences with parents, poor decisions and toxic religion. It’s easy to want to see them find healing and growth, and it’s heartwarming when they do. For the most part, they respond positively to the way “The Chosen” portrays Jesus, which is deeply satisfying.

“This experience was what I needed right now,” participant Emma said, openly weeping after she finished watching.

Imani, a participant who was abused by the church growing up, said, “A lot of people back home when I told them I’m watching this show about Jesus — they were like, ‘Are you okay?’ knowing my background. And I’m just taking things Jesus said from ‘The Chosen’ and trying to apply them to my life.”

The participants were shocked and pleased that a “Christian” show was so well done. They are deeply concerned with mental health and were happy to see Jesus seemingly address it. They feel alienated and want to belong, so they loved how Jesus shows compassion to people who are different. They loved the show’s emphasis on diversity. They have had a lot of bad experiences with religious authorities and institutions in the past, so seeing Jesus portrayed as gentle and friendly was a relief.

READ: Creator of The Chosen clarifies remarks on Mormons

“My mom is not a kind person at all,” Imani said, through tears. “I wish she didn’t use religion to hurt so many people.”

The showrunners deserve real credit for the way that they do not shy away from letting the participants say things that they know will offend members of their audience. One of them describes abuse in the church. Another admits she’s gay. Another interprets the demon scenes in “The Chosen” as mental illness. The fact that the showrunners largely let the viewers speak their truth without correcting them is admirable, particularly when the most common response in modern disagreements is immediate debate.

The most unexpectedly powerful moment of the documentary is when the group meets Jonathan Roumie, the actor who plays Jesus. 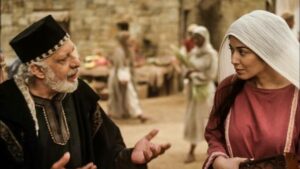 “Growing up, I didn’t really have much faith,” participant Adrian said. “I did a lot of research on Buddhism, Egyptian culture. So I ended up choosing to believe in many gods. I refuse to believe there’s just one higher power out there. I like to believe everyone deserves a chance to believe in anything that they want to. That being said, it took a while, and I’m constantly saying ‘God is good,’ ‘God bless,’ ‘blessings,’ you know.”

Roumie proceeded to gently ask questions about Adrian’s doubts and his faith; Adrian said that watching “The Chosen” helped him “get a better understanding of who Jesus was.”

“God is calling you,” Roumie told him. “He wants to know you on a deeper level. So that tug that you’re feeling? That’s Christ trying to get to know you. That’s what that is. You’ve got nothing to lose to explore. And as you get closer and closer, you’ll know what’s true. But I think he’s calling you. And I just felt I should share that with you.” 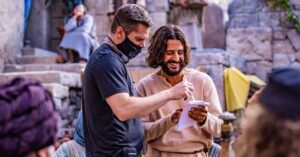 Dallas Jenkins and Jonathan Roumie, who plays Jesus, review the script during filming.

When Roumie promised to pray for him, Adrian started to cry.

Despite these touching moments, there’s no hiding that this documentary is a highly edited work made by the people who made the series they’re promoting. As such, it’s hard to tell how much was curated to fit the narrative that “The Chosen” team wanted — whether it’s the participants that were chosen, how much the participants said the “right” thing or which responses were kept.

The documentary sometimes very much feels like an episode of “The Chosen” itself as broken people from different walks of life meet Jesus and by the end openly weep over how He’s changed their lives. How meaningful the documentary is for most people largely depends on how authentic vs manufactured this lost to found narrative feels to them.

This is a worthy caution to anyone who wants to take what they see here and use it as the model for how to win young people back to the church. It’s easy to watch this and come away with the popular belief that young people reject Christianity because the church is abusive and judgmental, and if Christians were just more affirming and kind, people would come back to faith. While the anecdotal issues shared by the participants are real, keep in mind that it’s only the perspective of nine individuals. And as churches have slowly lost members, the churches that have leaned most into the “gentle and kind and welcoming” Christianity have been the churches to suffer the most decline.

One place that “The Chosen” does not seem to break new ground is gender demographics. It’s long been noted that faith-based films, and Christianity in general, appeal far more to women than to men in Western culture. Some see this preference by women for Christian things as evidence that women are more naturally religious than men, whereas recent books like “Losing the Good Portion” by Leon Podles argue it’s the result of bad Western theology that alienates men. Regardless, this is ironic given that Gen Z is the first generation in decades in which men are more religious than women — although it is going down for both, simply faster for women.

The men and women watching “The Chosen” seem to fit that pattern, with the women expressing much more enthusiasm for the show during and after filming. Adrian, on the other hand, didn’t truly seem moved until his personal encounter with Roumie.

That said, the documentary is overwhelmingly positive as an attempt to engage the next generation with Jesus through authenticity and empathy. Hopefully this work encourages more Christians to build bridges and understanding with young people to help reunite them with the one person they need to bring them belonging and restoration.

“Unfiltered: Gen Z Reacts to The Chosen” can be seen on “The Chosen” YouTube page and on The Chosen App.

–Joseph Holmes is an award-nominated filmmaker and culture critic living in New York City. He is co-host of the podcast “The Overthinkers” and its companion website theoverthinkersjournal.com, where he discusses art, culture and faith with his fellow overthinkers.

Previous: How “sustainable agriculture” is starving millions in Sri Lanka
Next: What we can learn from the Army bugler who flubbed taps at JFK’s funeral