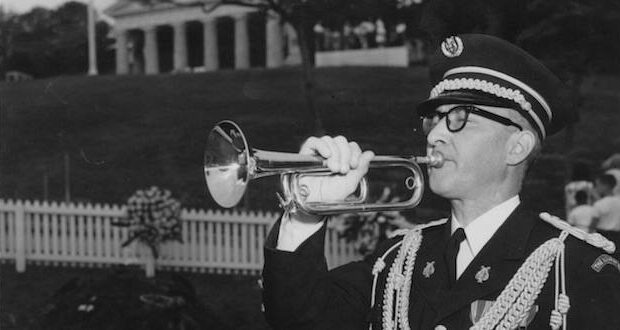 Clark at the funeral for JFK.

When his eleven-year-old daughter called up the stairs inside their Virginia home on the afternoon of November 22, 1963, Corporal Keith C. Clark, the Principal Bugler with the United States Army Band, was in the midst of one of his favorite hobbies. Along with a friend, he was sorting and organizing his growing collection of hymn books and other church music documents.

Sandy’s news understandably shocked her 36-year-old father: President John F. Kennedy had been shot and killed in Dallas. Camelot was over. Only eleven days earlier, Corporal Clark had stood steps from the president in Arlington National Cemetery to play “Taps” for the annual Veterans Day ceremony. He now suspected he would be called on once again – this time to play at the chief executive’s funeral.

How does a man prepare for such an assignment?

“Just in case, I wanted to look my best, and I went out to get my haircut,” Clark recalled.

Though more likely an oversight, it would actually be three full days until the decision was made to have a bugler.  Clark’s phone rang just after 2:30 A.M. on November 25th – the day of the funeral – officially notifying him of his assignment.jen

After getting a few more hours of sleep, Corporal Clark showered and reported to Arlington National Cemetery. It was 6 A.M. But nobody was there yet, so the bugler decided to catch a nap. It was a mistake. The next thing he knew, the phone beside his bed was ringing, shaking him from his slumber. It was now 9 A.M. – and he had missed the rehearsal.

An agitated and concerned colonel asked if he knew how to play “Taps.”

The decorated bugler, who began playing at age six, and who soloed with the University of Michigan Band at fourteen, and who played with the Grand Rapids Symphony Orchestra at fifteen, tried to reassure the nervous officer.

“I cannot remember a time when I did not know ‘Taps,’ sir,” he told him.

But the sad day was about to get worse.

Arriving back at Arlington at noon, Clark would wind up waiting three hours for the graveside service to begin. Obviously, the atmosphere was sober and tense. The air was also cold. There was a mark on the ground, just five yards from the riflemen, where the corporal was supposed to stand. Concerned about the blasts disrupting his hearing and pitch, he objected. The television producers insisted. It would make for a better picture.

As the service progressed and moved towards Clark’s moment, his mind wandered to 1 Corinthians 15:51-52: “We shall all be changed, in the twinkling of an eye, at the last trumpet: for the trumpet shall sound, and the dead shall be raised incorruptible, and we shall be changed.”

The 24-note piece would conclude the heartbreaking service. All eyes and cameras were on Clark as he began to play. But then came the sixth note. He fumbled. Flubbed. Missed. Broken. However you want to describe it. But he kept going and concluded the playing of “Taps” flawlessly.

Many in the crowd and those watching on television thought the mistake was deliberate – a poignant nod to emotion and anguish of the moment.

After the emotional service, Clark packed up and headed to give his usual slate of trumpet lessons. Arriving home, his family met him at the door. His daughter Karen recalled the day:

“Our family nervously waited in front of the TV during the live broadcast. When we heard Dad play Taps and break a note, we all groaned in dismay. I was only in third grade and felt total humiliation that of all the perfect playing I’d ever heard from my Dad (I don’t ever remember him making a mistake, even when just practicing!); it had to be in front of the whole world. Hours later, when he came home, Sandy and I practically jumped him and asked why he had to have made a mistake. His face paled, eyes got huge, and he said, ‘What mistake!?’ He didn’t even know about it until he watched it on TV himself.”

Corporal Clark would receive hundreds of letters from people sympathizing with him. A nine-year-old wrote:

“Anybody is bound to make a tiny mistake in front of millions upon millions of people.”

Another wrote: “Hold your head high! In your one sad note, you told the world of our feelings.”

As it would turn out, buglers around the country reported making the same mistake in the weeks and months to come. Such was the power of suggestion.

How often do we mull over long ago errors, often allowing our past mistakes to shade and shape our present and future? Clark didn’t even realize he had made the error – and he refused to allow the mishap to consume or define his career. He would retire with honor from the Army three years later and go o to become a music professor at Houghton College in Houghton, New York. He retired in 1980.

We may think our mistakes humiliate us, when, in fact, they can humble and humanize. Nobody is perfect. Nothing is perfect.

Tom Sherlock, who served as the senior historian at Arlington, once suggested Clark’s flub was fitting:

”It showed the tension that the nation felt,” he told a reporter. ”It’s part of the emotion. It’s when a speech is well delivered and a voice cracks because it’s an emotional time. It’s what should happen. And in that way, it almost personalized it. And it made it immortal.”

Clark wound up donating his 9,000-volume hymn collection to Regent University. He died in 2002 at the age of 74.

His place of burial?