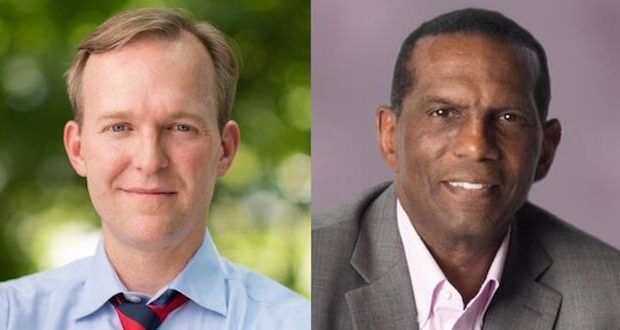 While national news media and Democrats demand President Donald Trump concede, Republican candidates across the nation, like Utah’s Burgess Owens, continue to win after they also refused to concede. The string of Republican victories has eaten away at Democrat majorities in the House at a historic rate fueled by women and minorities.

Democrats lost another seat in the House of Representatives Monday after the GOP flipped a seat the former NFL star Owens’s win over Rep. Ben McAdams (D-Utah).

McAdams, 45, called Owens, 69, on Monday to concede in the race for Utah’s 4th Congressional District. Owens had withstood calls from Democrats, McAdams and even Utah state media to concede. Owens’ faith in counting all the legal votes paid off.

“Today, I called Burgess Owens to congratulate him on winning this election. I am so grateful for the opportunities I’ve had to serve Utahns,” McAdams said in a statement.

The former Salt Lake City mayor was trying to win a second term after unseating African-American Rep. Mia Love (R-Utah) in 2018. He won by under 1,000 votes with many questioning the count at the time. McAdams was the only Democrat in Utah’s Congressional delegation.

Owens said in a statement: “WE DID IT! Thank you so much to every one of you for your unwavering support. It’s been a long journey, and now the REAL WORK begins! I look forward to working to protect the American Promise with you in the halls of Congress.”

“Burgess is a conservative who will always stand with Utah’s 4th District. I look forward to working with Burgess to tackle the most pressing issues facing our nation,” he said in a statement.

Owens joins an impressive number of Black, Hispanic and Asian Republican candidates who won their races this month, with some unseating long-time Democrat party leaders. The victories spell good news for Republicans who have sought to make inroads into minority communities, fueled by President Trump’s popularity. Trump received record support from all three communities this month.

Owens, an author and frequent commentator on Fox News, told KUTV on Monday that his priorities will be education, small businesses, and pro-life efforts.

“Those folks that I consider another area of our heroes that we don’t talk about, they take risks, they stay up at night trying to figure out how to make things work,” Owens said.

Owens said he would work to serve his community “to the very best of all of us no matter what side of the aisle you sit on.”

Democrats will retain control of the House, according to current projections and completed races, but may hold a majority in the next Congress as slim as a few seats.

Republicans have flipped around a dozen seats as well as picking up the open seat left by retiring Rep. Justin Amash (L-Mich.), a former Republican.

Nine races remain too close to call as of Tuesday morning.

Democrats have downplayed the losses but House Minority Leader Kevin McCarthy (R-Calif.) said over the weekend that the bolstered minority would mean Republicans will effectively run the body, citing the infighting in the opposing caucus and his party’s ideas.

“I believe at the end of the day, the Republicans will run the floor because it will be our ideas that are stronger—that the American public had rejected defunding the police, dismantling America,” he said. “We believe we can rebuild and restore the American way.”