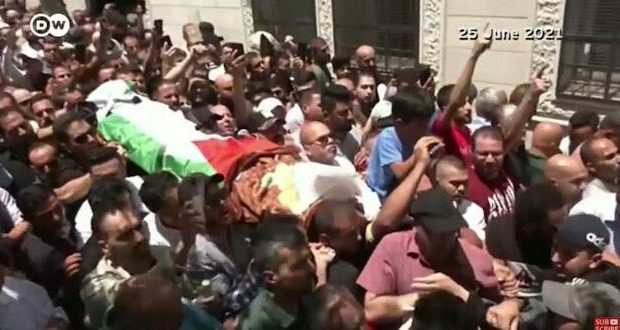 Palestinians carry the casket of a peace activist beaten to death by Palestinian police. Photo: video.

Palestinians say they’re living in a police state. But contrary to what some may think, it’s not at the hands of Israel, but their own Palestinian leaders.

Earlier this year, Palestinian Authority President Mahmoud Abbas enacted a decree-law on boosting public freedoms ahead of the Palestinian parliamentary and presidential elections, which were supposed to take place on May 22 and July 31.

Article I of the law provides for “establishing an atmosphere of public freedoms in all the territories of Palestine, including the freedom to practice political and national action.”

Article II provides for “banning the detention, arrest, prosecution of, or holding to account, individuals for reasons relating to the freedom of opinion and political affiliation.”

Since the new law was issued on February 20, however, Abbas, who recently entered the 16th year of his four-year term in office, has called off the elections on the pretext that Israel did not reply to his request to allow the vote to take place in Jerusalem.

Israel, it should be noted, never said that it would ban the Palestinian elections from being held in areas under its sovereignty in Jerusalem.

By calling off the elections in late April, Abbas was evidently trying to create the impression that Israel had banned the Palestinians in east Jerusalem from participating in the vote.

Abbas’s Palestinian Central Elections Commission, however, evidently disagreed with him.

In a statement, the commission said that 150,000 voters in east Jerusalem would be able to cast ballots at polling stations in areas under the control of the Palestinian Authority, on the outskirts of Jerusalem, a process that does not require a green light from Israel. Separately, a symbolic total of 6,300 voters would be allowed to cast their ballots in Israeli post offices in east Jerusalem, in accordance with previous agreements signed between Israel and the Palestinians.

The real reason why Abbas called off the elections was his fear that his fragmented Fatah faction would lose to Hamas and other political rivals. Abbas was afraid that Hamas would again win the parliamentary election, as it did in 2006.

Moreover, Abbas was afraid because senior officials from his own faction, including Marwan Barghouti, Nasser al-Qidwa and Mohammed Dahlan, were openly challenging him by forming their own electoral lists.

Abbas broke his promise to hold the first election for the Palestinian parliament since 2006 and the first presidential election since 2005. In the past few weeks, he has also broken his promise to “reinforce” public freedoms and ban detentions of Palestinians for expressing their views or because of their political affiliation.

During the same time, Abbas and his Fatah faction have shown that they are basically not all that different from other totalitarian regimes, especially those in the Arab world.

These leaders have turned the Palestinian Authority-controlled areas of the West Bank into a police state where political opponents are beaten to death, arrested, tortured and intimidated.

They have turned these areas into a police state where the Palestinian government mobilizes thugs to beat peaceful demonstrators and journalists.

Nizar Banat, the political activist and outspoken critic of the Palestinian leadership who was allegedly beaten to death on June 24 by Palestinian security officers, was not the only Palestinian victim of Abbas’s unprecedented crackdown on freedom of expression. Since Abbas’s decision to call off the elections, dozens of Palestinians have been rounded up by the Palestinian Authority security forces.

Had the foreign media and international human rights organizations paid attention to the practices of the Palestinian government against its people, Banat might still be alive. Had they paid attention to the daily arrests of political activists, Palestinian journalists and political activists protesting the death of Banat on the streets of Ramallah might not have been beaten.

The silence of the international community and media towards the human rights violations by the Palestinian Authority has prompted Palestinian journalists to make a direct appeal to the European Union to provide them with protection.

Several Palestinian journalists who were severely beaten or intimidated by the Palestinian security forces over the past few days issued the following statement:

“I am a Palestinian journalist. I call on the European Union and international human rights institutions to provide necessary action to protect me during my journalistic work. Unfortunately, my colleagues and I have been subjected to attacks, restrictions, and bans on journalistic work for days by the Palestinian security forces.”

“The Palestinian press is in danger – the danger of repression, prevention of coverage, and concealment and falsification of the truth.” 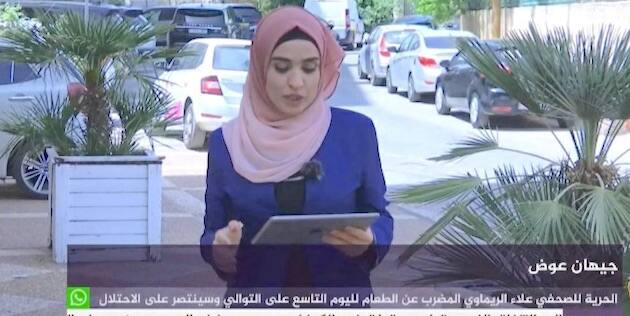 Palestinian activist Jihan Awad says journalists are under threat from the Palestinian Authority, not Israel.

Another Palestinian woman, Hala Marshood, wrote in response to the violent attacks by Palestinian security officers and Fatah thugs on Palestinian protesters:

“The situation today was terrifying. Beatings and assaults, some of which amounted to [sexual] harassment, and theft of phones. Attacks on people who were filming; sticks, stones and cans are thrown [at the protesters]. This is what happens when a corrupt authority creates gangs and thugs.”

The current uprising against Abbas and the Palestinian Authority is not out of love for the activist who was reportedly dragged out of his bed by 27 Palestinian security officers and bludgeoned to death with iron bars and clubs.

Instead, the spontaneous protests reflect the Palestinians’ growing frustration and disillusionment with their corrupt and repressive leaders. The protests, in addition, are mainly directed to the Biden administration, whose representatives have recently been courting and searching for ways to cozy up to Abbas and his Fatah cohorts. The message they are sending to the Biden administration: Stop empowering our corrupt leaders.

“Since the last American decision to ‘strengthen’ the PA in the West Bank, the reality on the ground reflected escalating suppression of freedoms; on top of them is the freedom of expression, and floating next to it corruption that reaches the doorsteps of our homes. The international community, with its governments, institutions, and people, are also responsible for this murder because they know very well that they have been supporting a systemic corruption in the last years that only increases, and the situation of Palestinians are deteriorating. And yet, they support such a corrupt criminal system. It is the international community’s support for such a regime that allows such crimes to continue. Nizar [Banat] and dozens like him, including myself, were victims of this corrupt criminal system that continues to threaten our lives.”

What will the western world, beginning with the Biden Administration, do with the testimony of the Palestinian journalists and political activists, who are being targeted and silenced by their own leaders? Will the Biden administration and the Western world actually legitimize — and reward with millions of dollars and possibly even a state — political leaders who brutalize, torture and murder their own journalists and citizens? To gain what? A legacy of America championing a regime like that?