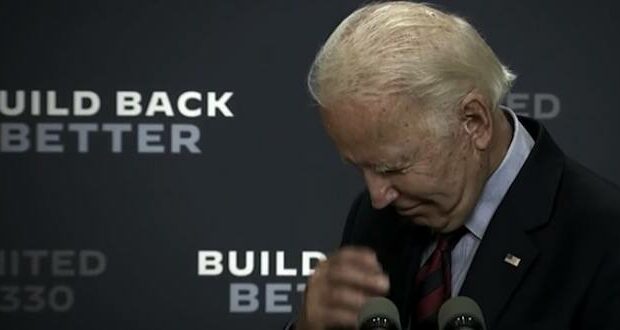 Biden performs the Sign of the Cross in front of cameras at a campaign stop. Photo: video screenshot.

Fifty-eight percent of those surveyed correctly identified Biden’s faith as Roman Catholic. An additional 31 percent said they were not sure of his faith, while 6 percent identified him as Protestant, 3 percent said he was atheist, 1 percent said he belongs to an “other religion” not listed and 1 percent thought his religion is “something else.”

A higher number of Democrats and Democrat leaners (63 percent) knew that Biden is Catholic than Republicans and Republican leaners, just 55 percent of whom identified Biden’s faith as Catholic.

The survey also asked respondents to weigh in on their thoughts about Biden’s religiosity. Among all U.S. adults, a majority (64 percent) said the president is religious, with 37 percent characterizing him as “somewhat religious” and 27 percent describing him as “very religious.” Meanwhile, 35 percent of Americans think Biden is not religious, with 21 percent saying that he is “not too religious” and 14 percent believe that he is “not at all religious.”

An overwhelming majority of Democrats and those who lean Democrat (88 percent) believe that Biden is religious, with 45 percent describing him as “very religious” and 43 percent agreeing with the characterization of the president as “somewhat religious.” Nine percent of Democrats thought that the president is “not too religious” while 3 percent believed that he is “not at all religious.”

DONATE: Can you spare a buck for Metro Voice?

The president has been criticized by Catholics and the pro-life community for promoting his Catholic faith while supporting abortion until birth. Support for life causes is a central aspect of Catholicism. Biden has previously been denied communion by his priest over his radical abortion views.

The media’s treatment of Biden’s faith is in sharp contrast to how the fledgling faith of Donald Trump was reported. Critics say Biden is regularly given a pass when his policies contradict his faith or for his regular stumbles and misquotations of scripture.  Trump on the other hand was private about his faith and only rarely brought it up. He was once widely mocked, even by liberal Christians, when he quoted a verse out of Second Corinthians, saying instead, “Two Corinthians.” It was an easy mistake for someone just becoming familiar with Bible readings said his defenders at the time.

While Biden has been a Catholic most of his life, those close to Donald Trump say the former president came to a personal relationship with Christ late in life. Trump, they have said, was being actively discipled by Christians in and out of the White House, including by Franklin Graham.