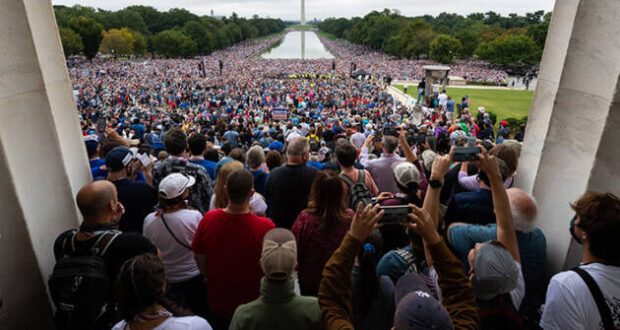 Christians across the nation are still talking about what happened Saturday in Washington, D.C.. On the same day that President Trump nominated Amy Coney Barret to the U.S.. Supreme Court, tens of thousands of Christians gathered for The Return and a day of prayer and repentance led by Franklin Graham.

The central theme of the day was the call for the nation to seek repentance.

A number of Christian leaders called the nation to repentance.

READ: What God whispered to Anne Graham Lotz during her cancer

President Trump took part in the event, sending a message from the White House to be read to The Return crowd. He stated, “On this inaugural National Day of Prayer and Return, the First Lady and I join millions of Christians here in the United States and around the world in prayer, as we turn our hearts to our Lord and Savior.”

He also spoke of the nation’s Christian heritage: “Following in our ancestors’ footsteps we continue the ‘firm reliance on the protection of Divine Providence’ that provides us enduring strength and reassurance in our times of need.”

CBN’s Gordon Robertson and his father, CBN founder Pat Robertson, joined in, with Pat crying out, “Lord, this is your world, this is your land. We ask that you’d come and heal our land and take charge. For, Lord, we don’t know what to do, but our eyes are upon you.”

At the same time, Franklin Graham led a prayer march starting at the Lincoln Memorial and going down the entire National Mall. Tens of thousands of prayer warriors showed up before the march began, packing every inch around the Lincoln Memorial and down each side of the reflecting pool. Graham introduced a surprise prayer participant, Vice President Mike Pence. He thanked the massive crowd for doing the best thing they can for their country: lifting it up to God.