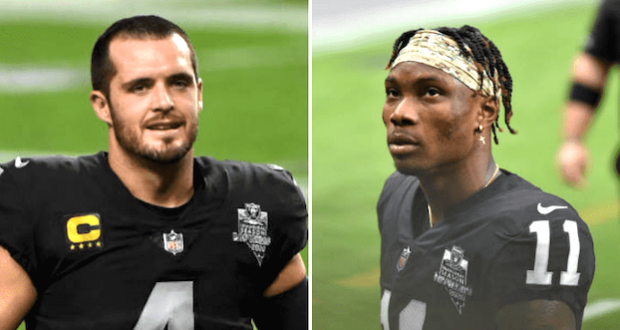 Derek Carr, quarterback of the Las Vegas Raiders and a committed Christian, is reaching out to a teammate who caused a fatal car crash.

Receiver Henry Ruggs II, who was released by the Raiders last week in the wake of the deadly crash, has been charged with reckless driving and driving under the influence resulting in death, among other charges. Prosecutors said the ex-player was driving drunk at more than 150 mph when he crashed in another vehicle, killing Tina Tintor.

“I will always be here for him,” Carr said of his friend Ruggs. “That won’t change. He needs people to love him right now … he needs to be loved. If no one else will do it, I’ll do it.”

Carr has spoken about the importance of glorifying God and once admitted he almost left football to become a pastor. He similarly reacted to former head coach Jon Gruden’s recent resignation over negative language used in past emails. Despite disagreeing with the contents of Gruden’s messages, Carr encouraged people to show love to him.

“I don’t condone that kind of talk,” he said. “I don’t talk that way. My kids sure as heck will never talk that way. It’s hard, because I love the man so much. I have family members that have done things, I’ve done things, that I’m glad I’m still loved. I think more than anything, [Gruden] needs people to help him, to love him, in whatever areas that we can. But at the same time, what’s right is right and what’s wrong is wrong.”

Carr was emotional in speaking about Ruggs and revealed that his former teammate texted him hours before the accident to ask for help on a golf swing, making news of the deadly wreck that much more surreal.

“My emotions have been on a roller coaster so to speak this year,” he said. “My heart goes out so much. I’ll try to say it with a straight face, because I’ve already been emotional about every bit of this. But to the family, to all the families involved, no one ever wants to see this, whether it’s a football player or not, you never want to see something like this happen. It broke my wife and I’s heart, honestly.”

Previous: How to get cheap (or free) health insurance if you retire early
Next: Virtual Christian performer JC releases first single, “Biblical Love”