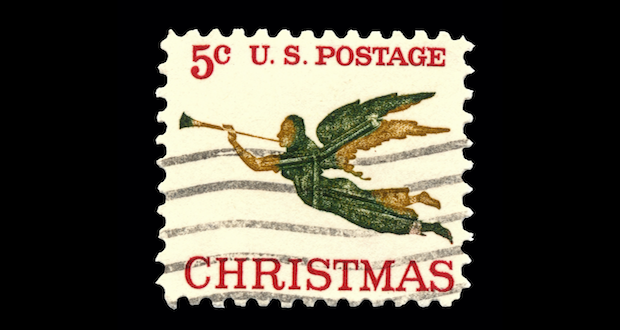 Step up to any United States Post Office counter or log onto its official government-sponsored website, and anyone in the market for “Christmas”-themed postage stamps has three options: 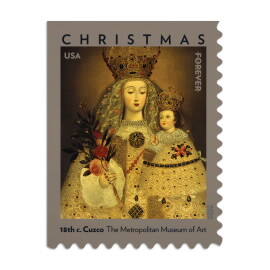 This year’s official Christmas stamp features a detail of Our Lady of Guapulo, an 18th century oil paining.

That a Christmas stamp is available featuring a depiction of the religious roots of the holiday seems almost obvious – but for two points of consideration:

First, Christmas-themed postage stamps, let alone “religious”-themed ones, are actually relatively new, only dating back to 1962.

Second, given the cultural revolution, many of us have been living through at the hands of secularists determined to rid society of any and all references to faith – it’s somewhat remarkable that a government-sponsored religious stamp has survived the recent attacks on faith. We should be glad.

READ: Finding faith in The Nutcracker

Prior to 1962, Christmas cards and packages were franked with regular stamps. Despite thousands of requests from the public each year, it’s not clear why it took so long for the Post Office to oblige. Canada gets credit for the first Christmas stamp at all back in 1898 – and other countries followed suit.

Issued on November 1, 1962, with an initial print run of 350 million, the first United States Christmas stamps were wildly popular. By the time the last Christmas card was mailed by year’s end, over one billion had been printed and used. 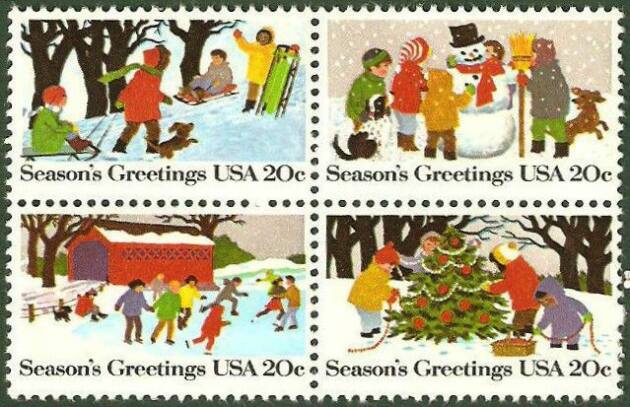 While alluding to Christmas, most US postage stamps released for the holidays are not religious. 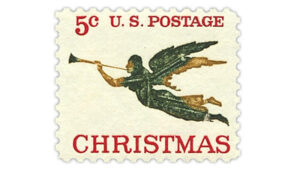 But it was Wisconsin Republican Representative Melvin R. Lair who successfully advocated for the first “religious”-themed stamp – a green and yellow 1840 watercolor of the Angel Gabriel. It was issued in 1965.

Critics immediately pounced, claiming a religiously themed Christmas stamp somehow violated the separation of church and state. Then Postmaster John A. Gronouski huddled with government lawyers and emerged satisfied that such charges were without merit. But in response to such criticism, the Post Office began using artistic depictions of the Madonna and Child – a move designed to point to the cultural, rather than the religious, significance behind the images themselves. 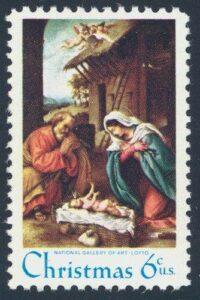 Since the first angelic stamp in 1965, nearly fifty religiously-themed Christmas ones have been issued. Earlier this year, the Postal Service responded to criticism surrounding their decision to not issue a new “Madonna and Child” stamp in 2021. The “Our Lady of Guapulo” stamp was released in 2020.

“We have more than a half-billion religious-themed holiday stamps in inventory and based on prior year’s purchases, that’s more than twice sold during a typical Holiday season,” USPS’s Mark Saunders said.

According to the Postal Service, the “first “Christmas stamps” in the United States weren’t postage stamps at all, but Christmas Seals — stamp look-alikes with no postage value, sold by charities to raise money. At first, Christmas Seals were commonly called “Christmas stamps.” A postal clerk in Denmark, Einar Holboell, came up with the idea of Christmas Seals while sorting Christmas cards for delivery in December 1903. At the time, money was desperately needed to build a hospital for children with tuberculosis (TB), a major, global public health threat. Why not ask people to buy a small sticker to decorate their holiday cards, to raise money for this charitable cause?

“Holboell’s idea took root and was a huge success in Denmark. In 1907, an American Red Cross volunteer in Delaware, Emily Bissell, adopted the idea to raise money for a TB sanatorium in her state. In less than a month, more than $3,000 was raised, 10 times the fundraising goal. The next year, the Red Cross sold Christmas Seals nationwide, raising funds and awareness to fight TB. Postal officials reminded patrons not to place the Christmas “seals or stickers” on the address side of envelopes, to minimize confusion, but this advice was often not heeded. Christmas Seals are still sold today, now by the American Lung Association.”

Today, the availability of a government-issued “religious” Christmas stamp should give us hope that all is not lost in today’s increasingly mixed-up culture. Only blinded ideologues and radicals somehow see such stamps as the government’s endorsement of a particular faith. After all, the Postal Service also sells stamps acknowledging the celebrations of Hanukkah, Kwanzaa, Diwali and EID.

It would be good for Christians who mail Christmas cards to request and purchase “Madonna and Child” stamps. Make a statement and provide a witness to the true reason for the season. Christmas isn’t about Santa Claus or snow-covered mammals – it’s the greatest story ever told about the greatest man who ever lived.

Previous: West Side Story is refreshing in faithfulness to 1950s Broadway
Next: 1 million Afghan children may starve to death this winter