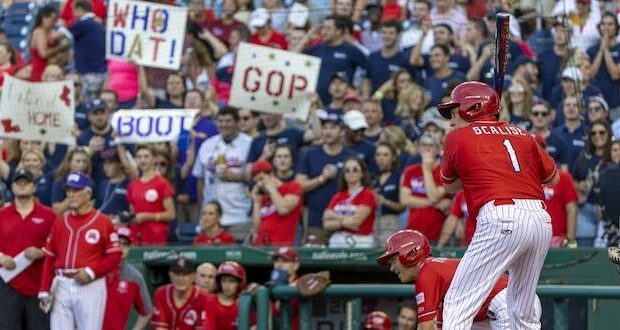 Rep. Steve Scalise (R-LA) bats at the Congressional Baseball Game for Charity at Nationals Park July 28, 2022 at Nationals Park in Washington, DC. He was shot and seriously injured by a Democrat activist during a warm-up for the 2017 ball game. (Photo by Tasos Katopodis/Getty Images)

The Republican red wave took place just as expected say commenters on social media. The GOP shut out the Democrats 10-0 in the annual Congressional Baseball game at Nationals Park in Washington on Thursday evening.

The Congressional Baseball Game is an annual event between the Democrats and Republicans in Congress. Last year, it made a return after being canceled in 2020 because of the COVID-19 pandemic. Before last year’s GOP victory, the Democrats boasted a three-game winning streak.

This year’s decisive win led Republicans to argue that the result foreshadows a similar red wave in the midterm elections, “The Washington Examiner” reports. The GOP hopes to win back control of one or both chambers of Congress and polls show they are heavily favored to do so.

Returning again this year was Rep. Steve Scalise of Louisiana.  It has been five years since he and four others were injured when a gunman, later identified as a Democrat activist, opened fire at Eugene Simpson Park in Virginia. Scalise spent months in medical care but eventually returned to Congress and the ball diamond.

He was present for this year’s shellacking.

“This 10-0 shutout at the #CongressionalBaseballGame is only a preview of what’s coming in November!” the Republican National Committee tweeted.

“Since being elected to Congress, the @GOP IS 2-0 in the #CongressionalBaseballGame. This is the red wave. #Winning,” Rep. Stephanie Bice, R-Okla., said in a tweet.

At least one Democrat appeared to be a sore loser. Rep. Linda Sanchez, D-Calif., as she was being replaced by a pinch runner, was caught on camera flipping the bird at the GOP dugout. Rep. Pete Aguilar, D-Calif., was named MVP for the Democrats, while freshman Rep. August Pfluger, R-Texas, was MVP for the Republicans.

“Since 1909, the Congressional Baseball Game has been an annual bipartisan event beloved by all and enjoyed by thousands,” according to the event’s website. ”Members of the United States Congress from each party solidify friendships off the floor and on the field. Over the last century, the Congressional Baseball Game’s popularity has contributed to its evolution into a foundation called Congressional Sports for Charity that supports worthy and effective Washington, D.C., area charities.

“These charities include The Washington Literacy Center, The Boys and Girls Clubs of Greater Washington and Washington Nationals Philanthropies, along with the United States Capitol Police Memorial Fund in gratitude to the brave officers at the Republican practice shooting on June 14, 2017.”

Next up is the Congressional Women’s Softball Game, which is set for Sept. 14 and will raise funds for young women with breast cancer.

Previous: Real-life Top Gun school founder says God-given discernment made it possible
Next: After Roe: What Now? Do We Value Them Both?