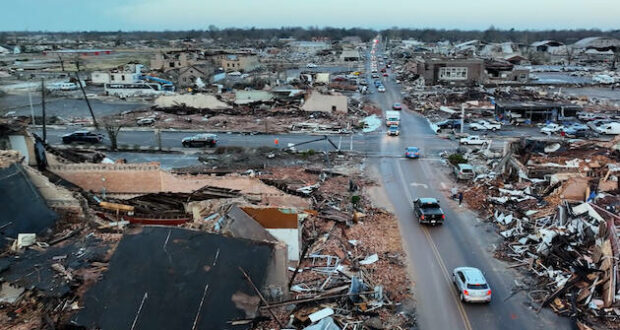 Samaritan’s Purse among those deploying to tornado ravaged areas

Christian relief agencies are pouring into six states devastated by a historic tornado outbreak that hit Friday night into Saturday morning. Samaritan’s Purse is already on the ground with relief trucks and volunteers.

The worst damage was across western Kentucky where Gov. Andy Beshear called the storms “the most severe tornado event in Kentucky’s history.” The city of Mayfield, with a population of 10,000 in Graves County, was almost completely wiped out.

Over 100 have been confirmed dead with hundreds more still missing. In a Kentucky candle factory, just 40 people were pulled alive from the rubble. Over 110 were working when the twister struck. Six people are confirmed dead in a Missouri Amazon distribution warehouse outside of St. Louis.

The storms were part of an intense winter weather system that struck states including Arkansas, Illinois, Kentucky, Missouri, Mississippi and Tennessee. The catastrophic outbreak included more than 35 tornado reports across the country. The line of storms stretched over 500 miles from Northeastern Texas to Michigan.

Samaritan’s Purse is deploying to both Kentucky and Arkansas initially. Even as people were emerging from the rubble, the ministry founded by Franklin Graham was already deploying Disaster Response Units. One tractor trailer loaded with equipment and supplies has already arrived in Arkansas already and another arrived in Kentucky. The ministry said dozens are already on the ground. Plans for other states to receive assistance are already being finalized.

One of the Dec. 10-11 tornadoes, being called the “quad-state tornado,” formed in Arkansas, crossed parts of Tennessee and Missouri, and then ripped across southwestern Kentucky. This storm left a trail of destruction more than 200 miles long, among the lengthiest twister tracks ever documented in the United States.

“This has been the most devastating tornado event in our state’s history. What it has done here is indescribable. The level of devastation is unlike anything I’ve ever seen,” Kentucky Governor Andy Beshear said early Saturday morning.

Experts have noted that such a powerful and far-reaching storm system in December is unusual, and something that would typically take place in April or May.

“I’ve been with the ministry 17 years,” Todd Taylor, the manager of U.S. Disaster Relief of Samaritan’s Purse said. “We’ve seen some Christmas tornadoes, we’ve seen Christmas ice storms but nothing to this magnitude. So we immediately started making preparations throughout Friday evening as we saw these happening.”

“First off it’s getting on the ground Intel,” Taylor said. “While we appreciate all the media coverage, we often find that with these tornadoes and some of the reports, while it looks like substantial damage, it may be a very limited scale. Where this one is so widespread it’s really hard for anybody to come to grips with what’s happened.”

The organization, according to Taylor, will start sending crews and equipment to hard-hit Kentucky on Sunday.

“So we are working with local church partners, first and foremost, to be able to find out what is the on the ground situation and then we’ve got our team of program managers that are in transit right now to get into these areas to begin meeting with local emergency management officials, meeting with our church partners and key volunteers, that have been out with us on other storms across the nation that may live in those areas, just to be able to get a good sense of where we need to be and start defining what a response is going to look like, even before all of our equipment leaves our warehouses,” Taylor said.

As the organization’s crews assess the damage, Taylor said it’s hard to say how many volunteers they will have.

“We are continuing to respond to Hurricane Ida that happened in August,” Taylor said. “We have three teams of people down in Louisiana, we have another team of people in Watkin County, Washington from the flood that happened last month up there so we’re really busy and we’ve been given a great opportunity to show Christ’s love to a lot of hurting folks.”

Here’s how you can help

Here’s a look at some of the relief being provided and ways to donate.

The American Red Cross is making it easy to send a quick $10 donation simply by texting “REDCROSS” addressed to the number, 90999. Other donations can be made by calling 800-733-2767 or visiting redcross.org online. Other information, including suggestions on how to find someone affected by the storm, can be found here.

The Salvation Army has set up a disaster relief fund for the tornado victims. Donations can made here.

World Vision, a Christian humanitarian group, plans to begin shipping relief supplies to churches in Kentucky beginning Sunday. Besides food and emergency kits, the supplies will include heaters, blankets, solar lights and mini-refrigerators. Donations to help support those efforts can be made here.

Samaritan’s Purse, another humanitarian group, said it sent disaster response teams on Saturday to Mayfield, Kentucky, and Monette, Arkansas, while other teams started to head to the devastation in Tennessee and Illinois. A tractor-trailer stocked with tools and equipment departed from Texas, according to the group, with more help on the way from North Carolina when weather allows. Donations can be made here.

The 219-mile-long Tri-state Tornado of March 1925 is also considered the longest tornado path by meteorologists. It also has the distinction of beling the deadliest tornado in U.S. history, kiling at least 695 people as it passed through Missouri, Illinois and Indiana during the overnight hours.

It will be several weeks or months before this storm’s path is scientifically measured.

Previous: 100 may be dead after overnight storms across Midwest, South
Next: ‘Christmas with the Chosen’ breaks records with $10 million