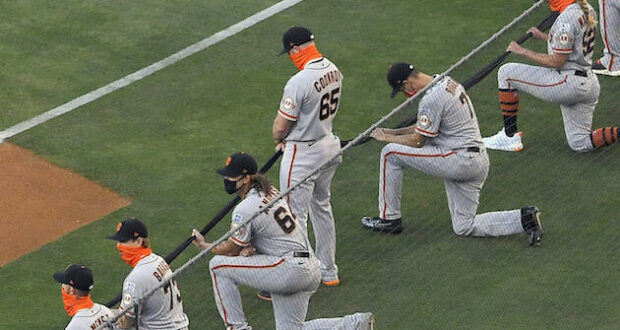 Coonrod stands as teammates make a political statement in support of the Black Lives Matter organization.

Pitcher Sam Coonrod of the San Francisco Giants recently took a stand by refusing to take a knee. He said his Christian faith was the reason he refused to kneel during the national anthem in a teamwide political statement in support of Black Lives Matter.

Coonrod, who is in his second season with the team, was the only player on either team not to kneel. Every other manager, coach and staff member also kneeled, according to the “San Francisco Chronicle.”

Coonrod, who made his Major League Baseball debut in 2019, said he meant no ill will.

“I don’t think I’m better than anybody,” he said. “I’m just a Christian. I believe I can’t kneel before anything but God, Jesus Christ. I chose not to kneel. I feel if I did kneel I’d be a hypocrite. I don’t want to be a hypocrite.”

Coonrod’s comments reflect a debate among the wider Christian community over the organization’s stances. Black Lives Matter, founded in 2013, says on its website: “We disrupt the Western-prescribed nuclear family structure requirement by supporting each other as extended families and ‘villages’ that collectively care for one another.”

The website further says the organization is a “queer‐affirming network” and seeks to “dismantle cisgender privilege”. In June, Southern Baptist Convention President J.D. Greear said he disagrees with some of the organization’s stances but affirms the statement that “black lives matter.”

He was attacked by BLM and Democrat activists for not joining others in the political statement.

Moments after the game began, multiple websites published articles reporting on his decision with two several attacking him for it.

“Giants’ Sam Coonrod had every right to stand, but his reason fell short,” read the headline of an article written by liberal reporter Monte Poole on NBCSports.com.

Poole accused Coonrod of not being an authentic Christian and called his remarks a “liquid contradiction” that “slid off his tongue and went dribbling down his chest.”

Poole didn’t include in his article the part where Coonrod said he only kneels to Jesus Christ. Apparently he thinks bowing to the mob should take precedent over Almighty God.

An article by Dan Gartland published on the liberal site SportsIllustrated.com took a similar approach.

“If a central tenet of Christianity is treating others with love and respect, it’s not clear how not joining a call for just that would be hypocritical,” he wrote.

Actually, Coonrod explained how it was hypocritical. He said he kneels for Christ alone and no one else.