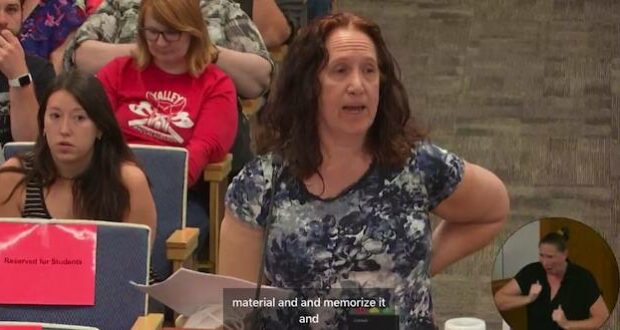 A sexually explicit classroom assignment was too vulgar to read before a school board. That’s what happened when a Nevada mom’s microphone was cut off after she read the assignment that had been brought home by her 15-year-old daughter. Video captured the moment the mother was silenced.

The mom stated that a teacher at Clark County School District — the nation’s fifth-largest public school district — forced her teen daughter to memorize and recite “pornographic material.” When the mother began reading the alleged assignment, the school board cut the mother’s microphone over obscene language.

“This will be horrifying for me to read to you, but that will give you perspective on how she must have felt when her teacher required her to memorize this and to act it out in front of her entire class,” the mother said.

A Board of Education member told the mother that they cut her off for the use of profanity.

“If you don’t want me to read it to you, what was it like for my 15-year-old daughter to have to memorize pornographic material and memorize it and portray —,” the mother said before her microphone was silenced.

When the microphone was turned back on, the mom read a state statute that would appear to describe what happened in the classroom as illegal.

Clark County School District told the Daily Caller that the mother “was given their full time for public comment.” A complete video shows the school board eventually allowed the mother to complete her thought.

The mother said that she met with the district with the help of a parent advocacy group. She said she is hopeful that the district will correct the situation without terminating the teacher.

The Clark County School District says it is “investigating the circumstances surrounding a class assignment consisting of a student-generated writing exercise that produced content not conducive to student instruction.”

The district has made the video unshareable on its Facebook page.

–Wire services and the Daily Caller.

Previous: All 50 states now have historic gas price above $4 a gallon
Next: Another poll finds majority want most or all abortions banned