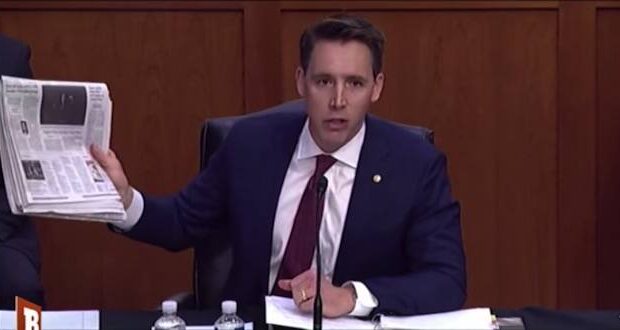 “It is absolutely vital to continue to hold them accountable for their outrageous attacks on her faith, on her family and on her Catholicism,” Hawley said shortly after the hearing, in a press conference with other GOP senators and several conservative groups supporting Barrett’s nomination, according to the “St. Louis Post-Dispatch.”

Hawley and U.S. Sen. Roy Blunt, R-Missouri, both back quick confirmation of Barrett to succeed Justice Ruth Bader Ginsburg, who died Sept. 18 from complications of pancreatic cancer. Hawley said he would vote only for a nominee who has “explicitly acknowledged that Roe v. Wade was wrongly decided.” The landmark decision, handed down in 1973, established a woman’s right to an abortion.

“I just heard my colleague, Sen. Coons, make a reference to an old case, the Griswold case, which I can only assume is another hit at Judge Barrett’s religious faith, referring to Catholic doctrinal beliefs,” Hawley said. “I don’t know what else it could be, since no one has challenged this case. It’s not a live issue and has not been for decades.”

Hawley also referred to a comment made by U.S. Sen. Dianne Feinstein, D-Calif., during hearings in 2017 to confirm Barrett’s appointment to the U.S. Court of Appeals. Feinstein said at the time that when one reads Barrett’s speeches, “the conclusion one draws is that the dogma lives loudly within you, and that’s of concern.”

Hawley said, “The ranking member referred to your Catholic convictions as ‘dogma’ — that’s a quote — ‘that lives loudly within you,’ picking up the very terminology of anti-Catholic bigotry current in this country a century ago.”

“When you tell somebody that they’re too Catholic to be on the bench, when you tell them they’re going to be a Catholic judge, not an American judge, that’s bigotry,” the Missouri Republican said. “The pattern and practice of bigotry from members of this committee must be stopped, and I would expect that it be renounced.”

Democrats completely ignored the issue of religious freedom during the two days of hearings even as that issue is at the forefront of many of the nation’s highest courts because of covid restrictions.

Previous: Local churches partner with police for Faith and Blue initiative
Next: Why Trump?