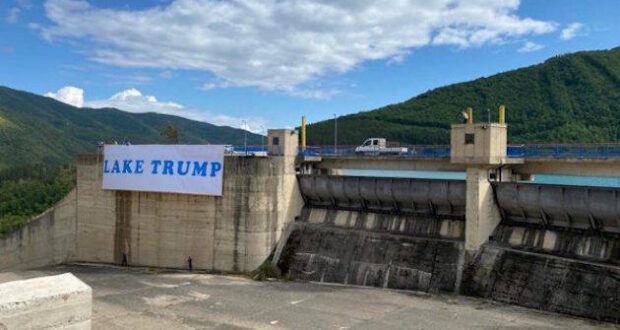 The nations of Serbia and Kosovo are naming a major lake after President Donald J. Trump. The news comes after Trump was already nominated for a Nobel Peace Prize for his successful effort to bring peace between the two nations.

The name change came through negotiations after Kosovo and Serbia delegations looked for ways to make positive changes in their shared border and resources. Gazivoda/Ujman Lake  will now be known as “Lake Trump.”

The idea was originally met with humor but quickly gained support by citizens of both countries.

“Initially everybody smiled at the idea,” reported the newspaper Gazeta Express. The newspaper reported that  Kosovo Prime Minister Avdullah  Hoti expressed his readiness to support the idea. The same idea was also endorsed by Serbian President Aleksandar Vucic at another meeting. President of both countries had expressed their support for the move at a White House meeting earlier in September.

The debate, and later the Agreement, about Ujman Lake have triggered a wave of positive reactions in Kosovo. Kosovo has reached an agreement with the US for the State Department to carry out a feasibility study on how to share the lake’s resources.

The Ujman/Gazivoda Lake is mostly located in Kosovo’s territory but almost 20 percent of it is in Serbia. This artificial lake was filled decades ago when Kosovo was part of Yugoslavia. After the end of the 1999 war, in which the Clinton administration bombed a civilian high speed train, there was a lot of tension that spilled over into debates about control of the lake and other resources.

As both countries move towards a  name change for the lake, other infrastructure is already being named after Trump.

Another lake and bridge located in Bernjake, northern Kosovo, has been named after the US President. It is not the first time that foreign governments have acknowledged President Trump’s efforts to settle disputes among nations or fulfill promises long ignored by the American Government.

In 2019 a new city in Northern Israel was named Trump Heights. The planned community is located in the Golan which, while historically part of Israel, was under Syrian control until 1967 when Israel defeated six invading Arab nations. Israel kept the Golan and recently annexed it with the Trump administration supporting the move.