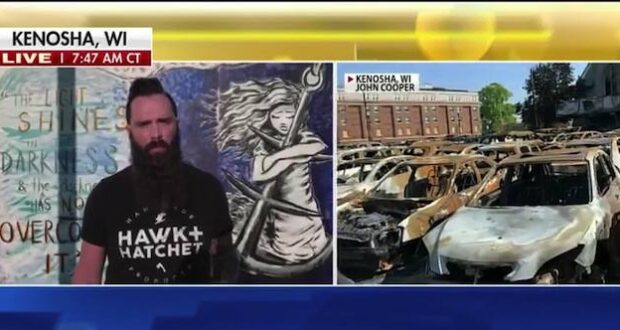 John Cooper of the band Skillet, shares his experience living near the riots in Kenosha.

John Cooper, lead singer for the Christian band Skillet, says he’s been forced to arm himself to protect his home and family from rioters in Kenosha, Wisconsin.

In an interview on Fox & Friends Saturday, Aug. 29, Cooper shared that he lives downtown in the city of 100,00, just blocks from the turmoil.

“I never thought I would enter into a time when I actually had to strap on my AR to keep my family safe because I’m living in a place that is blocks away from where they’re burning down the place that I live in.”

Protests have evolved in to nightly riots with looting and hundreds of arson fires in the city after Jacob Blake was severely wounded by a police officer last Sunday.

On Friday evening, Aug. 28, police released details of the arrest and shooting. In a press conference, police said Blake, who is black, was armed with a knife and “forcefully fought” with the officers who tried to arrest him, putting one of them in a headlock. The statement from the Kenosha Professional Police Association also says officers twice shot Tasers at Blake but these failed to subdue him.

As the struggle ensued in Blake’s vehicle, an officer drew his gun and Blake was shot several times.

Blake survived but family says he may be paralyzed.

The incident resulted in six nights of protests in the city with much of the violence being perpetrated by outside individuals from as far away as Portland and Seattle.

Cooper says he’s heard from friends and family who live in Minneapolis, Madison, Chicago who have seen social media posts encouraging rioters about “getting a group together and going to Kenosha to f-up the neighborhoods. Our friends were seeing these posts on social media in their cities of people saying they’re going up to Kenosha and saying f the police, f Kenosha. f-up this neighborhood, that neighborhood.”

“That’s my neighborhood!” Cooper says he lives just three blocks from where most of the violence has occurred.

“I’m right in downtown,” he sated.

“Fox and Friends host Pete Hegseth responded with a question: “You’re having to arm yourself to defend your property? Break down where we are now and how we got there.”

Hegseth then asked what the situation is after National Guard troops entered the city this week.

“Our governor finally allowed the federal government to bring troops in.

“It has quieted down a lot,” he said. “It’s become mostly dead silent at night which is a real blessing. It’s strange–you see this stuff on the news in Portland, Seattle and Chicago and you think, ‘It could never happen in your town of Kenosha, Wisconsin. It’s a small town. It’s an awesome town.”

The singer shared that his in-laws have lived in the city their entire lives and “never one night have ever locked their doors.”

In a video posted to his social media, Cooper filmed himself sitting in the dark as morning neared. “I’ve just been on the night watch by a window again. The protesters did come by screaming and not what.” Other videos posted include his survey of his neighborhood with looted and burned-out buildings and virtual mass destruction on some blocks.

It’s not the town he’s used to.

Cooper defended his city and the civil nature that it is known for saying that it had been listed as the second best place in the nation to raise a family.

He also shared his thoughts on justice and the people truly fighting for equity on the streets.

He went on to talk about those who may support the movement but who are silent on the rioting, looting and murders taking place in cities across the nation. He says that the violence is drowning out the true message of peaceful protesters.

“The problem is there is not enough condemnation against the violence because when people are burning down your city, slashing your tires, threatening to come in to my neighborhood and quote ‘f-up’ my neighborhood, now I can’t hear you. And so there does need to be more conversation. I want to see more love and more equity. I want all those things to and you can’t go around burning down your city.”

As Federal authorities descended on the city in the last two days, rioting has subsided somewhat.

On Friday, Federal law enforcement and local police arrested over a dozen individuals from a Seattle Antifa organization. They were apprehended while they fueled gas cans at a local Quick Trip in the city. Police also found weapons stashed in a mini-van belonging to a group member.

The violence has forced residents to arm themselves.

Asked if he was prepared to defend his home, Cooper responded without question.

“Absolutely! I should be out playing concerts, rockin’ the free world and instead I’m hunkered down praying for the very people I may have to hurt that night. That’s something that America needs to deal with. I don’t want to hurt anybody. I’m praying for safety, I’m praying for their souls. I’m praying for racial justice. I want all those things but you can’t come and threaten peoples’ families in America.

Cooper, whose band has been nominated numerous times for a Grammy, shared a story of how God is moving in the midst, bringing pastors of different colors together.

“We had an amazing prayer meeting. Fourteen pastors came together: black, white, red, brown came together because we believe there is one hope.”

“It is the hope of Jesus Christ that gives you a brand new heart to love people that don’t always love you back,” he continued. “Jesus can change all of this.”

Cooper said Americans cant count on leaders to bring hope and that even a president can’t do it.