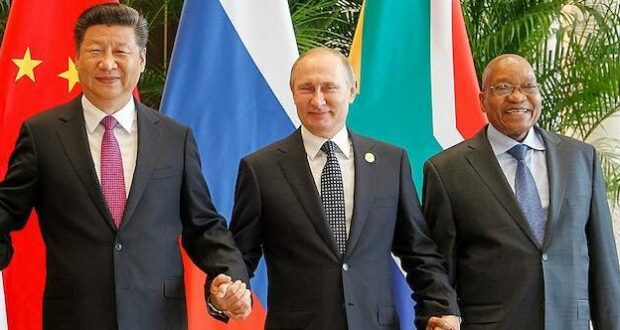 South Africa, once a stalwart ally of the West and democratic principles, is solidifying its position in the sphere of Russia and Communist China. It will hold joint military exercises with those two nations in February.

The drills, dubbed “Operation Mosi,” were announced by The South African Department of Defense on Jan. 19. The exercises are planned to coincide with the first anniversary of Russia’s invasion of Ukraine.

Operation Mosi is intended to “strengthen the already flourishing relations between South Africa, Russia, and China,” according to a statement shared by the South Africa National Defense Force on social media.

South Africa’s move towards authoritarian and Marxist ideology has been quickly accelerating since it threw off the shackles of apartheid in  1994. While Nelson Mandela saw the value in continuing close ties with the West and Western ideals, subsequent leadership of the nation moved the country ever closer to Marxist and communist regimes around the world.

The exercises have been in the planning stages since December, and will include 350 South African personnel working with Russian and Chinese forces in Durban and Richards Bay “with the aim of sharing operational skills and knowledge,” according to the statement.

Russian state-owned media outlet TASS reported that Russia would send two ships to the exercises, which the nation believes will “strengthen multilateral ties between the three countries.”

It is unclear what type of units the Chinese Communist Party (CCP) will send.

The move to build military ties with Russia and China is likely to sour South Africa’s relations with the United States, which has historically been a key economic and diplomatic partner in the region.

South Africa has been growing apart from its Western partners since Cyril Ramaphosa became president in 2018. Shortly thereafter, in 2019, the nation engaged in its first trilateral military exercises with Russia and China.

Ramaphosa’s administration has refused to condemn Russia’s war of aggression against Ukraine. However, a survey shows nearly three-quarters of all South Africans believe the invasion to be “an act of aggression that must be condemned.”

“This suggests that the South African government, which has refused to condemn the invasion and has even embarked on joint military exercises with Russia, is hopelessly out of touch with its voters, who believe that the country should be offering moral, diplomatic, and even military support to democracies that are invaded by their neighbors,” said a report from the Brenthurst Foundation, which conducted the survey.

The Democratic Alliance, South Africa’s main opposition party, said that the exercises were “silly” and demonstrated that the nation’s current government was “biased” in favor of Moscow.

Ramaphosa’s alignment with the Kremlin and the CCP could signal hard times ahead for the United States in the region, which is currently in a struggle for influence across the African continent.

“The United States is all in on Africa, and all in with Africa,” Yellen is slated to say in a Jan. 20 speech in Senegal.

“Our engagement is not transactional, for show, or for the short term.

“The United States is here as a partner to help Africa realize its massive economic potential at home and advance its growing leadership abroad.”