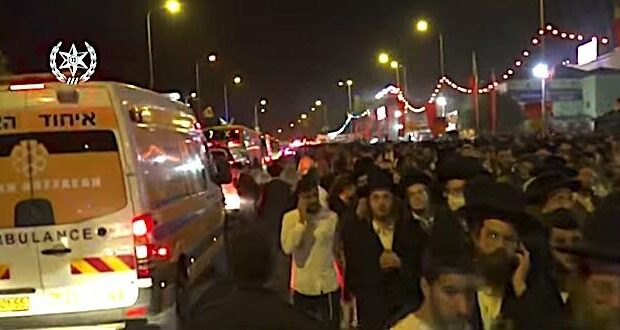 Israel is reeling from the death of at least 45 people during a stampede Friday morning at a Jewish religious festival in the northern part of the country. More than 150 were injured.

For a small country like Israel with just over 9 million citizens, the number is grievously high. Proportionately, it would be as if 1,650 Americans died at one event.

Israeli citizen Malkah Abuloff, who services as the guides for all Metro Voice tours to the Holy Land, shared on Facebook the impact of the tragedy. “Such a tragic day, we all know someone who was in Meiron and died or someone who knows someone. It’s such a small nation- one big family.”

The tragedy occurred Mt. Meron in northern Galilee where tens of thousands of mostly Ultra-Orthodox Jews gathered for a festival called Lag BaOmer. The event is named after a 2nd-century rabbi who is buried there and people gather to celebrate the rabbi and light bonfires as part of the celebrations. The event was the first mass religious gathering to be held legally since Israel lifted nearly all restrictions related to the coronavirus pandemic.

Witnesses told Israeli television that the crowd was being herded through a narrow space when the side walls began to fall causing panic. “Masses of people were pushed into the same corner and a vortex was created,” stated Dvir who spoke to Israel’s Army Radio. He recounted that he saw the first row of people fall, then a second row from the pressure of the stampede.

Prime Minister Benjamin Netanyahu said children were among the dead and described it as one of the “heaviest disasters” to befall Israel, as he visited the scene.

“There were heartbreaking sights here, people crushed to death including children,” he said. “A large proportion of those who have perished have not yet been identified … This is tearing up the hearts of families.”

An officer from Israel’s Zaka emergency rescues service, which typically deals with cleaning up the aftermath of suicide bombings and terror attacks, told Ynet news “I’ve never seen anything like this…We don’t know exactly what happened, but the result is unthinkable.”

Zaki Heller, spokesman for the Magen David Adom rescue service told Army Radio “no one had ever dreamed” something like this could happen. “In one moment, we went from a happy event to an immense tragedy,” he said.

Netanyahu declared Sunday a national day of mourning for the victims.

President Joe Biden in a statement express grief on behalf of the American people and added the U.S. was also “working to confirm reports that American citizens may have lost their lives or been wounded,” in the disaster.

A State Department spokesperson told NBC News “multiple U.S. citizens were among the casualties,” but did not give a specific number, adding that the U.S. Embassy in Israel was working with local authorities and providing consular support to affected U.S. citizens.