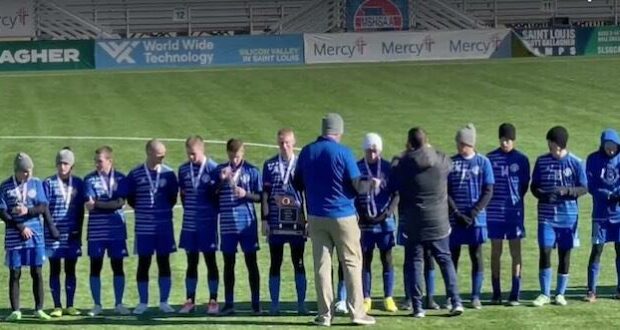 Summit Christian Academy has just completed its best season ever in boys soccer. The Lee’s Summit school was the runner-up in the Missouri Class 1 playoffs. St. Francis Borgia beat the Eagles 1-0 in the championship game in the St. Louis suburb of Fenton, Mo.

“We had the chances all throughout the second half, especially in the last 15 minutes,” St. Francs Borgia Coach Daniel Strohmeyer said. “How many times did we have guys in the box with the ball? They’re diving and sliding. We’re diving and sliding and trying to make something happen. We got a couple of decent shots and a couple of chances. You just hope one of them bounces the right way to get on someone’s foot to go in. It happened right there at the end.”

Summit Christian finished the year with a record of 18-7, including 14 games with at least three goals scored and seven victories in their final nine games.

The Eagles were recognized as the Fox 4 Hy-Vee team of the week.

“We didn’t wait for the ball to come to us,” forward Drew Pierce said. “We went to the ball. We were a team a lot of other teams were annoyed with because we’re all over. We’re a fast team. We’re an aggressive team”

Defender Trevon Hildebrand agreed. “Sure, we were a little discouraged because we could have had the state championship, but that’s still a really great job,” he said. “I’m really proud of my boys.”

“We Over Me” was the team’s motto for the season. Creason said this kept this team focused all season, teaching the value of team play over individual statistics.

Previous: ‘Dangerous legislation’: Franklin Graham talks about ‘Respect for Marriage Act’
Next: Five reasons for helping others on Giving Tuesday