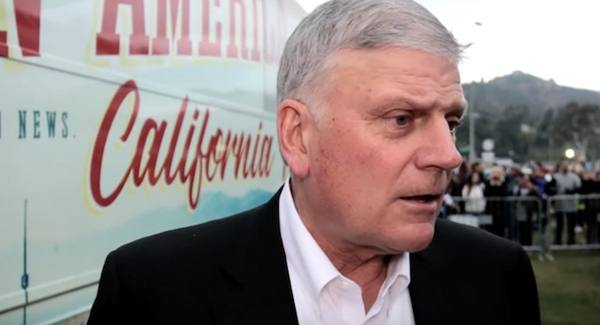 Franklin Graham is calling on Americans to contact their senators, warning them that the so-called “Respect for Marriage Act” legislation would fail to protect individuals with the traditional concept of marriage.

“The Respect for Marriage Act is coming before the Senate again on Monday. Why should that matter to you? Because it could impact you, your family, your church, and our nation. The name is a smoke-screen. Very deceptive,” wrote Graham, president of Samaritan’s Purse and Billy Graham Evangelistic Association, on his Facebook page on Nov. 26.

He added, “It’s like the Democrat’s ‘Inflation Reduction Act’ that did nothing but increase inflation and further hurt our economy.”

The Respect for Marriage Act (RFMA) would repeal the definition of marriage as between a man and a woman and a spouse as a person of the opposite sex. It would not require states to issue same-sex marriage licenses but would force them to recognize same-sex marriages performed in other states.

The House approved a version of the legislation in July by a bipartisan 267–157 vote, with 47 Republicans backing the bill. A day after the House vote, Senate Majority Leader Chuck Schumer (D-N.Y.) said he intended to get the bill to the Senate floor.

On Nov. 16, the Senate voted 62 to 37 to invoke cloture on the motion to proceed to the legislation, with 12 Republicans joining all 50 Democrats voting to advance the bill. Before the Senate vote, Schumer urged his colleagues to vote yes on the bill in a Senate floor speech, saying the legislation would make the United States a “better, fairer place to live.”

After the legislation passed cloture in the Senate, Tony Perkins, president of the Washington-based conservative advocacy group Family Research Council, issued a statement criticizing the Senate for “making a mockery of marriage as it tramples on a foundational right—religious freedom of the individual.”

The Senate is scheduled to convene and resume consideration of the legislation on Nov. 28.

“The current version of the Respect for Marriage Act being pushed by Senator Chuck Schumer is designed to provide strong protections for same-sex marriage—but it fails to protect those of us who believe marriage is between a man and a woman,” Graham wrote.

He added, “It is dangerous legislation that would be used against individuals, churches, and organizations who honor traditional marriage.”

To improve the current Senate legislation, Graham said it was important to include an amendment by Sen. Mike Lee (R-Utah).

“The Lee Amendment, if approved, can bring critically-needed protection for religious liberty and rights of conscience to the pending legislation,” Graham wrote. “Many say this is a long shot, but we desperately need Senators to demand the Lee Amendment be added to the current version of the Respect for Marriage Act before it is finalized.”

If added to the Senate bill, the proposed amendment would prohibit the federal government from taking any discriminatory action against any person who has a moral conviction or religious belief that marriage should be between “one man and one woman” or a union of “two individuals as recognized under federal law,” according to the language of the bill.

The amendment lists many examples of what such discriminatory action would be, including withholding, reducing, or denying “any entitlement or benefit under a Federal benefit program.” Another such action is to “alter in any way the Federal tax treatment of, or cause any tax, penalty, or payment to be assessed against, or deny, delay, or revoke an exemption from taxation.”

In a letter to colleagues dated Nov. 17, Lee explained that his amendment would offer individuals and groups protections.

“My amendment would ensure that federal bureaucrats do not take discriminatory actions against individuals, organizations, nonprofits, and other entities based on their sincerely held religious beliefs or moral convictions about marriage by prohibiting the denial or revocation of tax exempt status, licenses, contracts, benefits, etc.” Lee wrote.

Lee added, “It would affirm that individuals still have the right to act according to their faith and deepest convictions even outside of their church or home.”

“The Senate will be voting on the Lee Amendment next week, and if it isn’t adopted, no one who claims to support religious freedom should support the RFMA,” Lee wrote.

Graham called on Americans to reach out to their senators immediately over the legislation.

“Call your Senators as soon as possible and ask them to vote YES for the Lee Amendment—or to vote NO to the Respect for Marriage Act if it doesn’t have this amendment,” Graham continued.

He added, “Time is short—freedom-loving people have to take action before it’s too late.”

Like Graham, Family Research Council is making the same appeal.

“Tell your senators to insist that Senator Mike Lee’s amendment is adopted into the (Dis)Respect for Marriage Act,” the group wrote on Twitter on Nov. 23. “Email your senators, the next vote on the bill is Monday, November 28.”