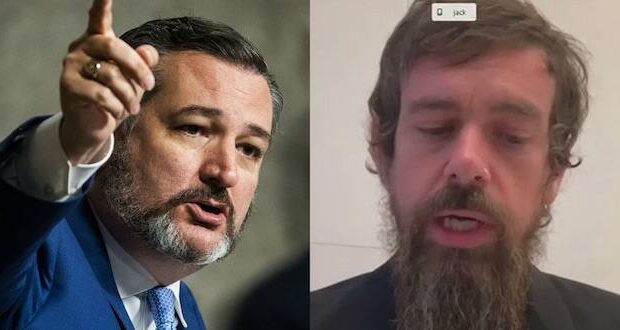 During the hearing, Senator Ted Cruz let Twitter CEO Jack Dorsey have it, telling him in no uncertain terms that Americans never made any decision allowing him to censor what news appears on the social media platform.

Cruz criticized the tech giant for censoring a major news story about alleged corruption involving Joe Biden and said, “who the Hell elected you” to decide what the media may report and what news Americans may see?

Dorsey, along with Google CEO Sundar Pichai and Facebook CEO Mark Zuckerberg, was subpoenaed to testify before the committee about censorship of conservative ideas on their platforms.

“Mr. Dorsey, who the Hell elected you and put you in charge of what the media are allowed to report and what the American people are allowed to hear,” said Cruz, “and why do you persist in behaving as a Democratic super PAC, silencing views to the contrary of your political beliefs?”

Earlier in his remarks, Senator Cruz asked Dorsey, “does Twitter have the ability to influence elections?”

Cruz then asked, “You don’t believe Twitter has any ability to influence elections?”

Cruz said the answer is absurd, and he’s right.

“Mr. Dorsey, who the hell elected you? And put you in charge of what the media are allowed to report, and what the American people are allowed to hear… and why do you persist in behaving as a Democratic super PAC?" pic.twitter.com/lrC9II2MxL

In August, LifeNews.com ran an article from Liberty Counsel, a pro-life legal firm that has represented Sanda Merritt, who worked alongside David Daleiden to expose the Planned Parenthood abortion company for selling body parts like hearts and livers of babies killed in abortions. After over a dozen undercover videos exposed Planned Parenthood staff members on the record explaining how they changed abortion procedures to secure aborted baby parts to sell to make enough money to possibly afford Lamborghini sports cars, Harris launched a retributive effort to charge the pro-life journalists with criminal charges in an attempt to put them in prison.

As the article explains:

Five years ago, it was former California attorney general Kamala Harris (now senator and VP candidate) who launched the investigation into the work of Sandra Merritt and David Daleiden, the founder of the Center for Medical Progress, after these citizen journalists discovered and produced videos documenting Planned Parenthood’s illegal trafficking of aborted baby body parts.

Under California law, conversations that “may be overheard” are, by definition, not “confidential” and can be recorded without consent. The recorded abortionists admitted under oath that their conversations with Merritt and Daleiden could be overheard by others in the public spaces where they were recorded, and they took no steps to prevent others from overhearing their candid discussion of what Planned Parenthood does behind closed doors. Therefore, the undercover videos produced by Merritt and Daleiden did not violate California video recording law.

But that did not stop Planned Parenthood and Harris from wielding a politically motivated prosecution against the two citizen journalists.

With Harris running for vice president, the article has received new life and has been shared over 572,000 times on Facebook. That raised the attention of Politifact, one of the various liberal media outlets Facebook uses to factcheck and potentially censor conservative and pro-life content with which it disagrees.

Politifact issued a factually incorrect and misleading “false” rating on the article that leaves out considerable information and distorts the facts of how Harris persecuted these pro-life journalists so aggressively she ordered her agents to raid Daleiden’s home.

Cruz said he’s tired of this kind of censorship.

“I have long said that Big Tech poses the single greatest threat to our First Amendment rights and the future of democracy. After years of flagrant bias against conservatives, Twitter and Facebook crossed the Rubicon two weeks ago when they brazenly censored the New York Post’s reporting on major allegations of corruption surrounding the Democrat presidential candidate, all just days before one of the most consequential elections in our nation’s history.”