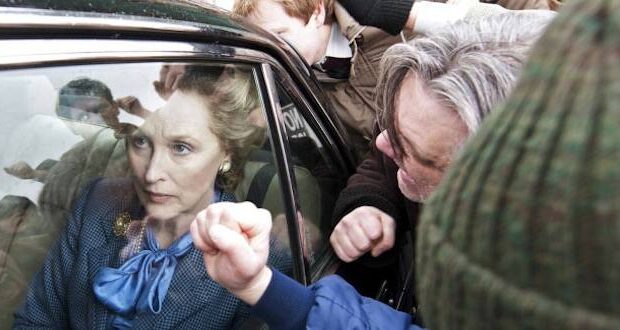 The Soviet Union gave Margaret Thatcher her colorful nickname “almost lovingly,” we hear in The Iron Lady. And, as anyone who knew the woman—or even knew of her—it was apt.

The daughter of a small-town grocer, Margaret, through strength of intellect and force of will, pushed her way into the male-dominated halls of the British parliament. When her party favored conciliation, Thatcher advocated confrontation. When her adversaries thought her weak, she showed she could fight with the best of ’em.

Through recession and war and 11 rough-and-tumble years, Thatcher dominated U.K. politics—a leader both loved and loathed, a prime minister admired and reviled. While many regard her as one of the island kingdom’s greatest leaders, people also called her merciless when she sliced budgets, a warmonger when she fought Argentina for possession of the Falkland Islands. In the end her own conservative party deposed her for being too rigid, too hard, too—

It’s 2008, and Margaret Thatcher—18 years removed from office—is helping husband Denis complete a crossword puzzle. She’s not speaking of herself in that moment, but she might as well be. She’s older now, and softer it would seem. She tut-tuts over the price of milk, fusses at Denis for not wearing a scarf. And yet the iron has not yet begun to bend … even as the rest of her faculties begin to fade. 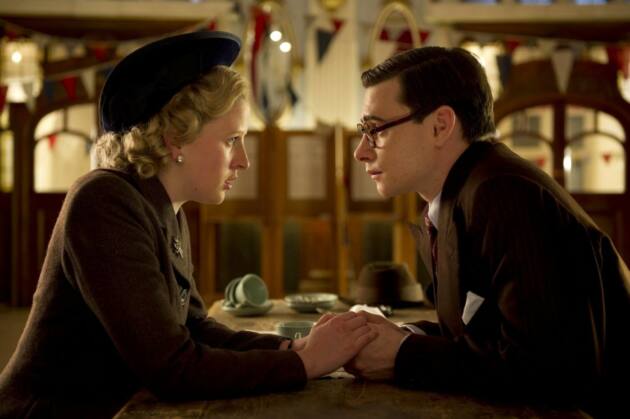 A young Margaret and Denis Thatcher before political life.

Denis, you see, is dead—gone for years. And yet Margaret still sees him, hears him, converses with him over soft-boiled eggs.

She knows she’s living a fantasy. Or, at least, most of the time she knows. And in moments of clarity, she knows she needs to dispel him for her own good.

“I can manage perfectly well without you now,” she tells him.

But is it possible the Iron Lady has finally, after all these years, met her match? Can she, with sheer force of will, push away the scourge of dementia?

Prodded by her daughter, Margaret visits a doctor who begins asking questions related to her state of mind. Is she sleeping well? Is she having hallucinations? How is she feeling?

Margaret pounces on the doctor’s use of the word feel. “People don’t think anymore,” she says. “They feel.” Margaret is far more interested in the realm of thoughts and ideas than mere feelings. So the doctor rephrases his question: What are you thinking? he asks.

Politics aside, the Margaret Thatcher we see on display in The Iron Lady is strong, principled and in many ways admirable. She is not without her flaws: She can come across as a bully—someone who might do well to pay more attention to how other people feel. Her drive to power did not come without sacrifice. And yet we see a hero, too—one who stands on her principles and articulates them beautifully. With every turn and every step, she walked into the political breech unblinking, and many a quote that comes from her mouth here might wind up on someone’s refrigerator.

And despite Margaret’s disdain for feelings, we also see a subtle, measured affection emanating from her to Denis: a meaningful glance, a squeeze of the hand, a playful game with a toy mouse. Their relationship is not, perhaps, ideal. But they stand by each other through the best and worst of times. Margaret’s dedication to the country is equaled only by Denis’ dedication to his driven, difficult spouse. And while Margaret is not the best mother, either, she does love her children. When an image consultant tells her what she’ll need to get rid of in order to push for party leadership, she agrees to everything … except her dual strand of pearls. Those, she says, were a gift from her husband on the birth of her twins, and “they are absolutely nonnegotiable.”

Thatcher, played by Meryl Streep, looks at a war map as Britain goes to war with Argentina over the Falkland Islands.

Through this and other hints, the movie subtly confronts us with the idea that sometimes service to one’s family can be just as meaningful and just as world-changing as storming the gates of power. Margaret makes some pretty difficult—questionable—choices to further her political career: When she wins a seat in parliament, the film shows her driving away, her children running after her and calling desperately for her to come back. Later, she gives her daughter a driving lesson: “One must be brave if one is to take the wheel,” she says. Her daughter, Carol, thinks they’re sharing a moment—but in reality Margaret’s plotting a move for party leadership. When the two get home and Carol realizes the truth, she storms off.

When Denis asks Margaret to marry him, she says yes—under one condition: She will not be someone who will stand in the background; she’ll not die washing teacups. “One’s life must matter, Denis,” she tells him. “Beyond all the cooking and the cleaning and the children, one’s life must mean something!”

Margaret was at the threshold of her incredible career—a political arc that would see her change the face of Great Britain and mightily influence the world. Indeed, her life would mean something.

In The Iron Lady, we see the cost of Margaret’s devotion to her country. She tears down her share of barriers. But in so doing, she builds others between herself and her family. By 2008, we see a woman largely alone: Her son’s in South Africa; her daughter doesn’t quite know how to relate to her. Her only confidante is her husband. Her dead husband.

The Iron Lady has earned her nickname. Strong. Unyielding. Hard. Cold. And by the time the credits roll—even as the film lauds her courage and principles and achievements—it whispers, was it worth it?

When Denis’ spirit prepares to leave, Margaret begs him to stay. I’m not ready, she pleads as he walks down the hallway. “I don’t want you to go!”

“You’re going to be fine on your own, love,” Denis tells her. “You always have been.”

It’s a complicated statement. Is it true? Absolutely. We’ve seen her go her own way from the beginning of her career—a grocer’s daughter making an impact in a world dominated by men. Is it laudatory? Absolutely. Who could deny the strength of will and character it took for her to do what she did?

And yet there’s a rebuke in there, too. You always have been.

And with that, Denis is gone. Margaret is alone, truly alone. She speaks more softly, it would seem, more gently. She asks Carol to help her with her hair, an uncommonly intimate gesture in their family. And we see her washing a teacup.

Previous: Why prayer is essential to the success of missions
Next: Vaccine volunteers report side effects as ‘severe hangover’