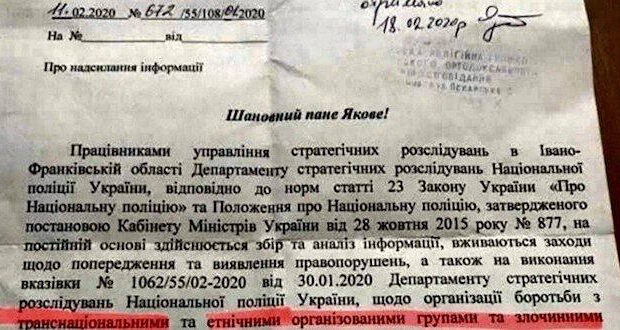 A demand by a senior police officer in western Ukraine for a list of the names, addresses and phone numbers of local Jewish community members has been roundly condemned by Jewish leaders as reminiscent of the Nazi occupation of the former Soviet republic.

The demand — from the Department of Strategic Investigations of the Ukrainian national police was received by Yakov Zalischiker, the head of the Jewish community in the city of Kolomyia.

As quoted on Monday by local news outlet television station, Zalischker explained that he had initially interpreted the letter as a prank, as most of the members of his community were elderly.

The letter was eventually revealed over the weekend by Eduard Dolinksy, head of the Ukrainian Jewish Committee, who published it on his Facebook page.

Signed by Mykhailo Bank, a senior police official in the Ivano-Frankivsk region of Ukraine, the letter demanded a copy of the community’s charter, together with “a list of community members with addresses and mobile phones” and “a list of Jewish students in universities of Kolomyia and Ivano-Frankivsk.”

READ: Kansas City under fire for requiring names of church-goers

Bank explained that he required the information because his department was “engaged in the fight against transnational and ethnic organized groups and criminal organizations.”

A response from the community informed Bank that its charter was available in the state registry, adding a reminder that “religious communities are separate from the state” and pointing out that “personal data of community members can be provided only in the case of registered criminal cases.”

Dolinsky condemned the police letter as echoing the roundup of Ukrainian Jews by the Nazis and local collaborators following the German military invasion of June 1941.

“Interestingly, in 1941, the Nazis and the Ukrainian auxiliary police also demanded a list of all Jews,” Dolinsky wrote.

One Ukrainian parliamentarian announced on Monday that he would seek a investigation into Bank’s letter, charging that the Ukrainian police demand was itself a “violation of the law.”

The parliamentarian, Igor Fris, told the local WestNews agency that he had also spoken with Volodymyr Holubosh — the regional head of Ukraine’s Interior Ministry — who “apologized on behalf of the leadership and staff to the entire Jewish community for the situation.”

While acknowledging Holubosh’s apology, Fris asserted that the police letter had been dangerously inflammatory.

“I believe that the leadership of the Ministry of Internal Affairs should evaluate the actions of its subordinates, which not only tarnish police uniforms, but also inflame ethnic conflict where it has never been in modern Ukraine,” he was quoted as saying.

Another parliamentarian urged the immediate dismissal of Bank from the Ukrainian police force.

“A policeman who decides to conduct a census of the Jews of Ivano-Frankivsk must and will be fired,” Oleksander Dubinsky declared on his Facebook page.

The letter was also condemned by the Israeli ambassador in Kiev, Joel Lion. 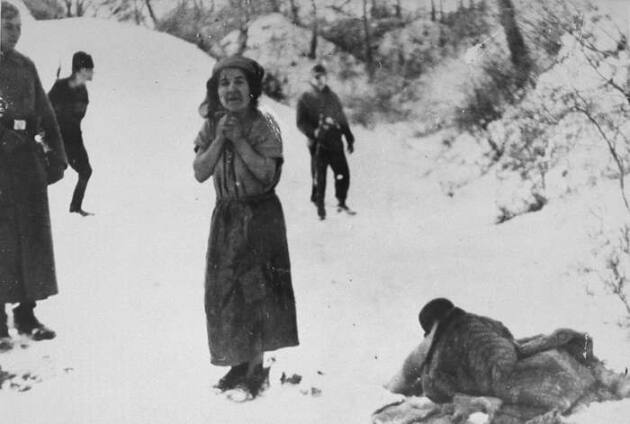 Settled by Jews from the early part of the sixteenth century, the present size of the community in Kolomyia is less than 1,000. During World War II, most of the city’s Jews were deported to the Belzec concentration camp.

Vasyl Nakonechny was pictured giving a Nazi salute as he received the title of “Honorary Citizen of Kalush” at the ceremony on April 20.

Many American cities have been criticized in recent months for requiring churches to turn over lists of members entering the church. The restriction is part of reopening guidelines that church leaders and Constitutional scholars say is illegal and dangerously reminiscent of Nazi times, regardless of the requirement coming during a pandemic crisis.