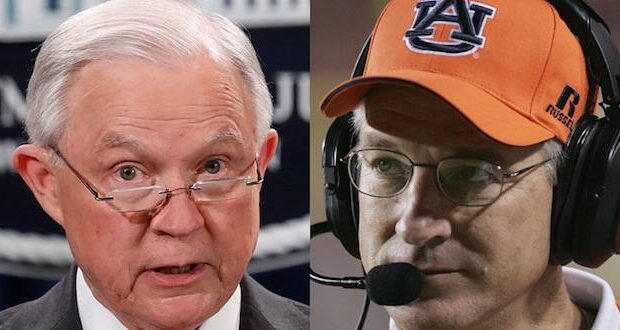 Candidates who tied themselves closely to President Trump swept Republican primaries across the nation on Tuesday as voter enthusiasm among Republicans reaches historic levels.

Known as Auburn University’s head football coach for over a decade, the 65-year-old political newcomer Tuberville is now strongly positioned to challenge Democrat Sen. Doug Jones. Jones won the seat by just 1.5% in 2017 to become the first Democrat to win election to the Senate from Alabama in 25 years. The upset came after ninth hour sexual harassment allegations by Democrats against Judge Roy Moore. The allegations were later shown to be untrue but, at the height of the #MeToo movement, were enough to tarnish Moore’s image.

Dirty tricks aside, Tuesday’s primaries were relatively free of last minute allegations on either side of political aisle.

President Donald Trump announced Tuberville’s win late Tuesday. The President had clashed with Sessions early on in the administration after the Attorney General recused himself from handling the Democrat Russian collusion investigation. The Mueller Report later found no wrongdoing on the part of the President or his campaign and Trump was acquitted in January of Democrat charges for impeachment.

Political analysts say Democrats had hoped that the impeachment proceedings and the weakened economy this spring would damage President Trump’s ability to effectively help down ballot candidates. Tuesday’s results have upset the apple cart in terms of media and Democrat’s assessment of Trump’s strong popularity among Republicans and Independents.

Alabama’s GOP primary in March had no candidate with a majority of the votes, with both Sessions and Tuberville having drawn about 32 percent, leading to the July 14 runoff.

In another high-profile win for President Trump, former White House physician Ronny Jackson, who served three presidents, emerged victorious from a GOP runoff for a seat representing Texas in the U.S. House of Representatives.

The runoff was triggered by no candidate receiving a majority of the vote in March. In that primary, Winegarner received 38.8 percent and Jackson received just 19.9 percent of the vote. After Trump voiced his support, Jackson’s popularity almost tripled.

Jackson said late Tuesday that he spoke with Trump over the phone.

“It’s official! I am honored to be the Republican nominee for #TX13! I promise I will make you proud!” he said in a statement on Twitter.

Trump wrote on Twitter: “Ronny will be a fantastic Congressman — Will represent the wonderful people of the Great State of Texas, and the USA, very well. Proud of you Ronny!!!”

Jackson says on his campaign website that he supports protecting the country’s borders, the Second Amendment, and pro-life policies.

M.J. Hegar, a former Air Force pilot, secured the Democrat nomination after winning the runoff for a U.S. Senate seat.

News outlets, including CNN, MSNBC and others, had run stories in the past few weeks doubting that Trump-backed candidates would win, based on polls showing Joe Biden ahead of the president in the 2020 presidential election. Political analysts, however, have said that polls this year may be even more unreliable than in 2016 when they showed Hillary Clinton beating Trump by up to 15 points. While Trump lost the popular vote by a razor thin margin, he won in a landslide in the Electoral College.

Previous: Opioid deaths in Missouri decline for first time since 2015
Next: Nearly 1/3 of investors 65+ sold stocks at the market bottom