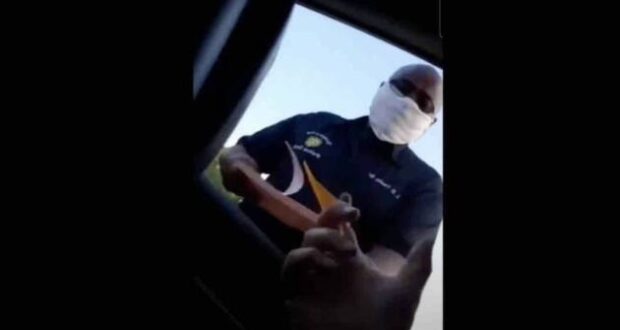 A Greenville, Mississippi, police officer tickets a Temple Baptist Church sitting in their car listening to a sermon on the radio.

The Justice Department (DOJ) has weighed in on a dispute between the right to exercise one’s religious freedom with local and state official’s over-zealous efforts to contain the spread of the coronavirus by ticketing people sitting in the parking lot of churches. This tension has sparked multiple lawsuits across the country as a video of an outraged pastor (below) has gone viral.

As the burgeoning coronavirus pandemic continues to reshape American society, many churches and religious institutions have also come up with creative ways to continue with faith-based activities while abiding by social distancing requirements. But in some areas, churches have faced challenges from local and state authorities for their efforts.

The DOJ has argued in a recent statement of interest (pdf) filed in support of a Mississippi church that sued the city and mayor for ticketing congregants during a drive-in service. The department argued in its filing that individual rights under the constitution do not disappear during a public health crisis.

“There is no pandemic exception … to the fundamental liberties the Constitution safeguards,” the DOJ said. “Indeed, ‘individual rights secured by the Constitution do not disappear during a public health crisis.’”

“These individual rights, including the protections in the Bill of Rights made applicable to the states through the Fourteenth Amendment, are always in force and restrain government action,” it added.

This comes as many local and state officials across the country have taken action to stop people of faith from any form of gatherings in an effort to slow the spread of the coronavirus pandemic. For example in New York City, Mayor Bill de Blasio said he would impose fines or potentially close down buildings of worship if services continued in the city.

This has fueled tension between localities and religious leaders as they attempt to navigate the uncertainties of how to operate during the pandemic.

In the case at hand, the Mississippi governor had designated churches and other religious entities as an “essential business or operation” that can operate as long as they abide by the Centers for Disease Prevention and Control (CDC) guidelines.

But the City of Greenville issued an executive order on April 7 barring churches from holding in-person or drive-in services until the governor’s stay-at-home order is lifted.

Although churches have moved services online or on teleconference calls, Temple Baptist Church does not have a website for live streaming and its congregants do not have social media accounts, the church said.

The DOJ notes the city has since dropped the fines but continues to enforce the order.

The church subsequently sued the city on April 10, seeking to block the mayor’s order. It alleges that the order violates the constitutional right of freedom to exercise religion.

The DOJ intervened in the case on Tuesday, filing a statement of interest to support the Mississippi church. The department argued that although it was important for local and state officials to impose restrictions to enforce social distancing in order to curb the pandemic, they are not allowed to single out church and religious entities for distinctive treatment.

“For example, if a government allows movie theaters, restaurants, concert halls, and other comparable places of assembly to remain open and unrestricted, it may not order houses of worship to close, limit their congregation size, or otherwise impede religious gatherings,” he said. “Religious institutions must not be singled out for special burdens.”

DOJ argued in its filing that the facts support the allegations that the City of Greenville had singled out churches for distinctive treatment because churches are “forbidden” to hold “drive-in services” even though citizens are permitted to sit in a car at a drive-in restaurant with their windows rolled down.

“[E]ven in times of emergency, when reasonable and temporary restrictions are placed on rights, the First Amendment and federal statutory law prohibit discrimination against religious institutions and religious believers,” Barr said.

“The pandemic has changed the ways Americans live their lives. Religious communities have rallied to the critical need to protect the community from the spread of this disease by making services available online and in ways that otherwise comply with social distancing guidelines,” he added.

“We appreciate the DOJ’s support for our position that this type of government action isn’t necessary to protect health and safety. It only serves to unnecessarily violate Americans’ freedoms protected by the First Amendment,” he added.

Temple Baptist Church is not the only church fighting to protect their constitutional rights amid the pandemic. On April 11, a federal district court granted a temporary restraining order to a Kentucky church, On Fire Christian Center, that sued Louisville’s Mayor Greg Fischer over a ban on all Easter church service gatherings in the city, including drive-in services.

In his opinion (pdf), U.S. District Judge Justin Walker called the mayor’s decision “stunning” and “‘beyond all reason,’ unconstitutional.”

In reaction to the DOJ’s intervention in the Mississippi case, Jeremy Dys, a special counsel for First Liberty Institute, stated that he hopes “that mayors and municipalities will take care to ensure their orders in the defense of the public health do not single out or target churches, synagogues, or houses of worship.” First Liberty Institute represented On Fire Christian Center in the Kentucky case.

Dys agreed with the department’s arguments, saying that government officials are required by law and the constitution to treat religious organizations equally. He added that places of worship are important during these uncertain times.

“America needs its churches to provide the calm, comfort, and care they uniquely provide to communities across the country,” he said. “And the government needs churches and other houses of worship to do just that during this pandemic.