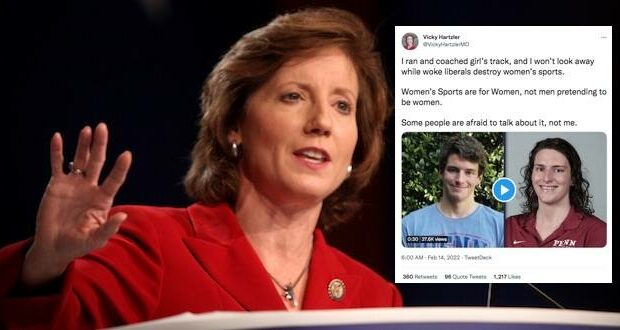 The social media giant said the tweet constituted “hateful conduct” for speaking out against biological men competing in women’s sports.

The action came after Hartzler tweeted that “women’s sports are for women, not men pretending to be women,” along with a campaign ad from her campaign account, not her congressional account. The sentence is the tagline from an ad that Hartzler began running last month. The ad also is featured on her campaign site. It shows a swimmer for the University of Pennsylvania. After swimming with the men’s team, Lia Thomas, a transgender athlete, now swims on the women’s team

I ran and coached girl’s track, and I won’t look away while woke liberals destroy women’s sports.

Women’s Sports are for Women, not men pretending to be women.

Some people are afraid to talk about it, not me. pic.twitter.com/mmwZFORJss

“Some people are afraid to talk about it. Not me. I’m Vicky Hartzler. I ran and coached girl’s track, and I won’t look away while woke liberals destroy women’s sports,” Hartzler said in the ad.

Hartzler’s campaign manager tweeted a screenshot of the notification Hartzler received locking her out of the account. It included the following warning. “Hi Vicky Hartzler, Your account, @VickyHartzlerMO has been locked for violating the Twitter Rules. Specifically for: Violating our rules against hateful conduct.”

“Vladimir Putin is a murderous psychopath who invaded a sovereign nation causing death and destruction and is currently allowed to tweet,” Hartzler’s campaign said in a statement. “Yet Twitter believes the bigger threat is a senior member of the House Armed Services Committee saying women’s sports are for women. It’s shameful, utterly ridiculous and a horrible abuse of censorship by big-tech giants to stifle free speech.”

Hartzler’s campaign said she will not delete the tweet and it still remains visible on her account. Hartzler, the popular front-runner to replace retiring Sen. Roy Blunt’s seat, said she will not back down from common-sense policies and says the left is destroying women’s sports across the nation.

In an exclusive interview with Metro Voice, she spoke at length about how her faith shapes her views.

The crowded primary also includes former Gov. Eric Greitens and Attorney General Eric Schmitt. Hartzler is the only woman in the race.