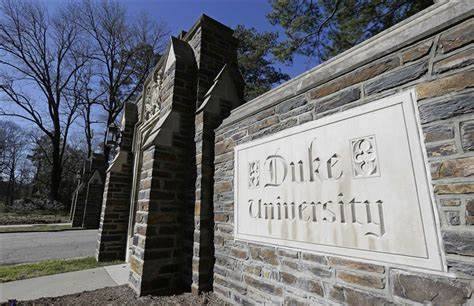 After having been caught spreading lies and misinformation through a government-funded education program, Duke University and the University of North Carolina have run out of time to keep that program’s multi-million dollar funding. The universities failed to meet the Trump administration’s demands to revise a shared Middle East studies program after the federal government accused the schools of misusing federal funds to advance anti-Semitic and anti-Israel bias and unfairly promoting Islam while virtually ignoring Christianity and Judaism.

The Department of Education sent an August 29 letter to the Duke-UNC Consortium for Middle East Studies threatening to cut funding to the program if the universities do not revise the curriculum by Sept. 22.

The government offers grants to several universities to help foreign language instruction and international education. According to Education Department data, the consortium received $235,000 from the federal government last year.

Among other complaints, the Education Department alleges the program unfairly focuses on the benefits of Islam while ignoring its abuse of women, religious minorities, children, homosexuals and central role in world-wide terrorism activities. The program then  left out Judaism and Christianity.

The department also accuses the program of failing to meet the federal grants’ foreign language requirements.

“The teacher-training activities hosted by the Duke-UNC CMES lack lawful focus on language development and instead advance narrow, particularized views of American social issues,” the letter said. “It seems clear foreign language instruction and area studies advancing the security and economic stability of the United States have taken ‘a back seat’ to other priorities at the Duke-UNC CMES.”

To qualify for future funds, the Education Department gave the schools until Sept. 22 to respond to the letter with a plan for revising the program. The Department of Education is requiring  Duke-UNC CMES to send a full schedule of its activities for the next year, including justifications for how each activity promotes “national security interests and economic stability.”

A UNC-Chapel Hill spokesperson told ABC News the Consortium will work with the Education Department but has yet to confirm if it revised the curriculum by the Sept. 22 deadline.

Holding said in an April 15 letter that the conference, titled “Conflict Over Gaza: People, Politics and Possibilities,” included a rapper who performed an openly anti-Semitic song.

“According to first-hand accounts, the conference had a radical anti-Israeli bias,” wrote Holding in the letter. “Reportedly, speakers and panelists distorted facts and misrepresented the complex situation in Gaza. A video recently surfaced depicting the main musical performer, rapper Tamer Nafar, singing a brazenly anti-Semitic song.”

“Honest academic debate featuring diverse perspectives and a wide range of views is critical in a democratic society and a central tenet of American’s educational system,” wrote Holding. “However, it is irresponsible, immoral and unproductive for taxpayer dollars to fund overtly biased advocacy under the guise of academic discourse.”

In response, DeVos said she was “troubled” by Holding’s letter and would investigate the program.

The probe is part of a broader Education Department effort to find and confront anti-Semitism and programs promoting Islam at US universities.