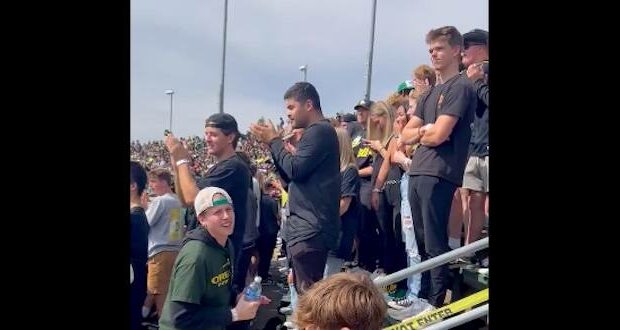 Leaders at the University of Oregon have apologized for anti-Mormon chants during a game against Brigham Young University on Saturday.

The Oregon Pit, the student section of the University of Oregon, later apologized on Twitter after the videos went public: “To all @BYUfootball fans in attendance at today’s game, we would like to apologize for the actions of the students in attendance. We do not condone or support any hateful speech directed toward one’s religion and are ashamed of those who participated.”

University of Oregon’s interim vice president for the Division of Student Life also issued a statement: “The university apologizes for the despicable chants made by some University of Oregon fans at today’s football game with Brigham Young University. There is no place for hate, bias or bigotry at the University of Oregon. These actions are simply unacceptable. We will investigate, and we call on our students and campus community to refuse to accept or tolerate this type of behavior.”

Although Oregon was quick to respond after videos emerged, mainstream media largely ignored the incident as well as the university’s apology. MSNBC and CNN had no reports on the event, though NBC reported on the story on Sunday afternoon. The “New York Times” and the “Washington Post” also have been silent on the story.

This contrasted with reporting on a racial slur allegedly being hurled at a black female volleyball player at Duke University last month. Rachel Richardson claimed that during a match against BYU, she heard a fan yell a racial slur at her “throughout the entirety of the match.” Shortly after her claim went viral, BYU apologized for the alleged incident and removed and banned the suspected fan, who was revealed to be a Utah Valley University student.

However, an investigation into the event could not corroborate Richardson’s story, and several witnesses stated they did not hear any racial slurs during the game. So far, no video ever emerged of the slur being used.