Home / Archaeology and History / Why did early Christianity rise so rapidly? 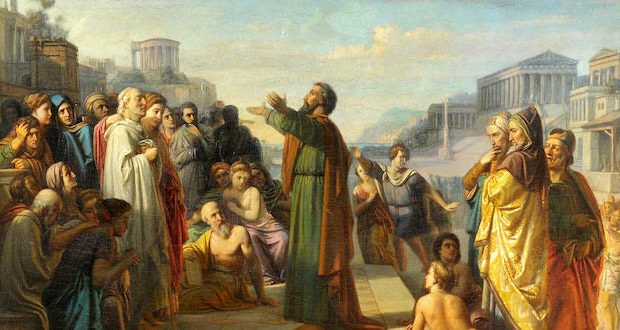 The Apostle Paul in Athens.

Why did early Christianity rise so rapidly?

New religions appear all the time — nowhere more than in the United States — but very few ever achieve prominence and permanence. Christianity is a rare and dramatic case of a faith that triumphed. The tale is told in Rodney Stark’s classic “The Rise of Christianity” with this descriptive subtitle in the 1997 paperback edition still on sale: “How the obscure, marginal Jesus movement became the dominant religious force in the Western world in a few centuries.”

Stark, a sociologist, is now retired as co-director of Baylor University’s esteemed Institute for Studies of Religion. The book treats its subject as a puzzle to be explained by objective social science scholarship and does not consider whether Christian teachings are true.

Though we lack reliable census data, Stark’s best estimate was that only 7,530 Christians existed at the close of the apostolic era in A.D. 100 — which conflicts with Acts 2:41. Stark would be the first to admit that those figures are anything but precise, but they provide plausible limits. If someone suggested a Christian population in 200 as ten thousand, or as ten million, then they would assuredly be wrong. But a range anywhere from (say) 150,000 to 350,000 would be quite plausible. But he’s confident total exceeded 1 million by 250, when systemic persecution by the Roman empire was reaching its peak. The Edict of Milan in 313 allowed the faith to exist without harassment, and as of 350, there were 33.9 million Christians. Stark figured that was a 56.5% majority of the population. Inevitably, by 380, this became the empire’s official creed.

What happened? Stark’s scenario drew upon more than 300 works, plus his own original research, and made heavy use of economic market theory. Let’s skim some of what he concluded.

Stark thought Christianity’s key advantages included the spread of Greek-speaking Jews across the Greco-Roman world who provided a base to build upon, the failures of rival paganism, attractive charitable efforts — especially during ruinous epidemics — innovative respect for women, high birth rates, good organization, close fellowship, demanding and respected moral standards, the inspiring example of martyrs willing to die rather than renounce their faith, and positive doctrines that were attractive to new city dwellers coping with chaos and squalor.

Regarding Jews, the Apostle Paul and other pioneer missionaries might have started from a town’s synagogue but met heavy resistance. Keep in mind that many Gentiles were “God-fearers” involved with the Jewish community who believed in the one God but did not convert or fully observe ritual law. According to Stark, Jews influenced by Greek culture — less strict than those in the Holy Land — “provided the initial basis for church growth” in the first and early second centuries but then continued as “a significant source of Christian converts” till the fourth century and into the fifth.

As for paganism, instead of the one God, it had too many gods in a confusing pantheon of deities — plus variegated beliefs and practices — and was ill-equipped to establish a united, culture-forming religion. Worse, the pagan gods were fickle, sometimes immoral in behavior and uninterested in humans’ plight, though they might bestow favors — or not — if appeased properly.

That left the spiritual terrain wide open for worship through a coherent belief in a moral and caring God and a community that produced charities and nursing during epidemics that were even offered to pagans. Stark wrote, “Christians cannot please God unless they love one another. Indeed, as God demonstrates his love through sacrifice, humans must demonstrate their love through sacrifice on behalf of one another” and this operates “beyond the bonds of family and tribe.

“These were revolutionary ideas.”

Pagan priests deserted their cities in times of trouble. And paganism was funded by the state and wealthy donors, whereas Christians built a stronger, popular base of supporters. And “simply put, pagan cults were not able to get people to do much of anything,” while an “exclusive” church had more spiritual and social power, thus providing “the better bargain” in the spiritual marketplace.

Then there’s this: Rome had built a uniquely large and unified culture with reliable transportation networks around the Mediterranean, which aided expansion of the new creed. And despite persecution, the regime “provided a greater level of religious freedom than was seen again until after the American Revolution.”

– Richard Ostling | Former religion reporter for The Associated Press and former correspondent for TIME Magazine. This piece first appeared at Get Religion.

Previous: Jewish leaders concerned with project that maps Israel supporters
Next: Absentee voting in Missouri and Kansas to begin