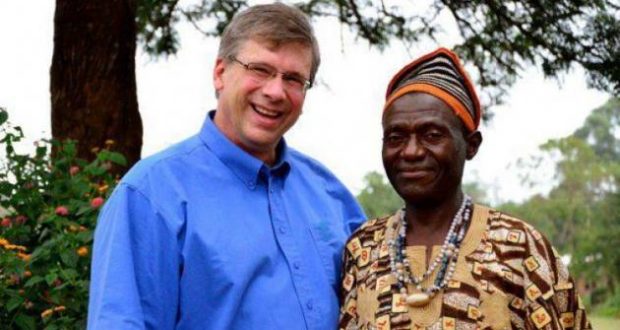 Cameroon continues to see an alarming increase in attacks on Christians by the hands of muslims. Now news comes that a Wycliffe Bible translator in the nation has been murdered in a brutal machete attack. Angus Abraham Fung was among seven people who were murdered when Islamic Fulani herdsmen stormed the Northern Province town of Wum.

Eli Tembon, who leads a ministry in the region called, “Oasis Network for Community Transformation,” told the says that the assault was sudden and horrifically brutal.

“They went into houses and pulled out the people,” Tembon said. “They attacked in the night and nobody was expecting. They just went into the home, pulled them out and slaughtered them.”

Reports indicate that Fung’s wife was also gravely injured in the attack, with the militants completely severing her arm with their machetes.

Partnering with Wycliffe Bible Translators, Fung was instrumental in the translation of the New Testament into the native Aghem language.

“We are saddened by the news of Mr. Fung’s death and the maiming of his wife in what appears to be Fulani violence spurred on by the government of Cameroon,” Dede Laugesen, executive director of Save the Persecuted Christians, told Charisma.

“Fulani terrorist activity is rising in all the countries bordering Lake Chad, and news of the government arming the Fulani is deeply concerning. This is why the Trump administration must move quickly to appoint a special envoy for Nigeria and the Lake Chad region and why we are so insistent that Squire Patton Boggs, an American law and lobby firm, end its representation of the Cameroon regime.”

The region in which the attack took place has been decimated by violence between the English speaking “Anglophone” community and the central government.

Though the country is bilingual, certain sectors of the English-speaking population are adamant that they hey are being discriminated against, particularly when it comes to representation in government. While security forces were able to suppress protests that erupted in 2016, an English-speaking armed separatist group has since emerged. Hundreds of civilians have been killed since the conflict began and over half a million have fled their homes.

The town of Wum is just 90 minutes away from the city of Bamenda where, in October of last year, an American missionary was shot dead. Charles Wesco, 44, was killed when his car was struck by automatic gunfire as he traveled to a local store with his wife, Stephanie, one of his children and a fellow missionary.

Wesco was the brother of Tim Wesco, a member of the Indiana House of Representatives.

More recently, several senior Bishops across the troubled nation have called on the English-speaking separatists to stop shutting down schools in the region. The anglophone community has mounted a widespread campaign against the state-mandated french language being used in schools, with the UN estimating that over 80% of the region’s education facilities are currently closed down on account of the widespread boycotts.

“All children deserve the right to education and a good future wherever they decide to spend their lives,” declared members of the Bamenda provincial bishops’ conference, according to the Catholic Herald. “Schools are not barracks, and [soldiers] should not enter them unless invited by competent authorities.”

Separatists have also been kidnapping clergy who refuse to get on board with the mass protests.

Roughly 4,400 schools have been closed and some 74 burned down, leaving over half a million children without any means of education across northwest and southwest Cameroon.

Earlier this month, one of the main leaders in the separatist movement, Julius Sisiku Ayuk Tabe, was sentenced to life after being prosecuted on charges of terrorism and secession. He was also handed a $350 million fine. The court’s decision came as a shock, particularly as Tabe was one of the more moderate leaders.

Felix Agbor Balla, a Cameroonian human rights advocate, told the Guardian that the conviction is only likely to inflame tensions in the country. “Sentencing Sisiku Ayuk Tabe and co will not solve the problems we have in Cameroon,” he said, “it will instead aggravate the problem.”

Wycliffe Bible Translators and Tearfund have not yet responded to requests for their reaction to Mr. Fung’s death.