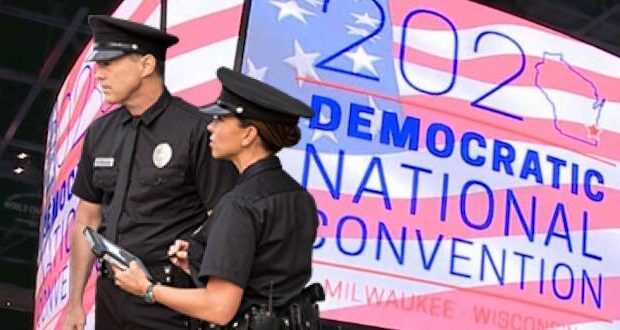 In a historic announcement, more than 100 police agencies are pulling out of agreements to send personnel to the Democratic National Convention (DNC) scheduled for August. The police departments stated they could not abide by the severe restrictions placed on them should they be required to quell riots that many expect during the Milwaukee event.

Law enforcement agencies from across the country had previously said they will send officers to handle security at the DNC, which will run from Aug. 17-20 at the Wisconsin Center in downtown Milwaukee.

The move follows an order from the Democrat-controlled Milwaukee Fire and Police Commission last week, which directed Chief Alfonso Morales to change the police department procedures—including prohibiting pepper spray should protesters become violent and destructive as they have been in cities across the nation, such as Portland. The order threatens to fire Morales’s if he fails to comply “fully and promptly.”

The order came amid intense media and Democrat criticism of police tactics on Antifa anarchists in Portland, where the U.S. Federal Courthouse was attacked and set ablaze last week. In those riots, police were attacked with commercial grade firework explosions, bricks, spears, rocks, and firebombs.

Morales announced the news of the agencies’ withdrawal in an interview with WTMJ-TV, citing concerns over the order prohibiting the police use of pepper spray and tear gas should lives be at risk. He didn’t elaborate on which law enforcement agencies plan to pull out.

The convention has been scaled down to a mostly virtual event with just 300 people expected to attend in person. Covid fears fueled the campaign to have just 300 in attendance but 700 supporters of Bernie Sanders said they would vote against the nomination of Biden, who has the lowest enthusiasm polling of any Democrat candidate in modern history. Most of the speeches will be delivered online from other locations, though Joe Biden has said he will be in Milwaukee to accept the nomination. Despite the event’s smaller scale, police are preparing for potentially large protests against the Democrats in and around the venue.

“We respect the Fire and Police Commission’s decision. But in this particular case, we strongly disagree with the actions they’ve taken,” Lamb said.

He said he was concerned that the safety of the public and police officers could be compromised.

Previous: New political ad attempts to use religion as weapon in 2020 election
Next: J.I. Packer, author of ‘Knowing God,’ remembered after his death