Abundant Life Church in Lee’s Summit and Jackson County have reached a settlement in a lawsuit over COVID-19 restrictions. The county will pay the church $146,750 and agree that any future health restrictions will not exceed those for secular gatherings.

Abundant Life sued the county over its COVID-19 recovery plan, saying it violated both the U.S. and Missouri constitutions by discriminating against religion. Thousands attend services each week at Abundant Life. But under the county’s initial easing of COVID-19 restrictions, church services were grouped with other large gatherings and social events and limited to no more than 10 people. This while retail stores and sporting events were allowed to have significantly more people.

Even non-essential stores, restaurants and bars did not have a numerical attendance limit. They were allowed to reopen as long as they followed the social distancing recommendations put out by the Centers for Disease Control and Prevention. The church contended that the county’s rules violated its rights to the free exercise of religion, free speech and the right of people to peaceably assemble. The county no longer restricts gatherings, and federal court decisions handed down over the past year in similar cases made it unlikely Jackson County would win in court.

In a May announcement to the church, lead pastor Phil Hopper outlined what he and the church believed was a serious injustice. 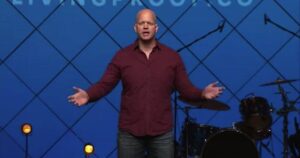 “What they’ve said is that churches, regardless of the size, can only gather with 10 people or fewer,” he said. “Because that is discriminatory, our church is filing a lawsuit today, appealing to the First Amendment of the U.S. Constitution. We’re doing everything we can to go through the legal channels that we’ve been given. We do have something called the U.S. Constitution, and the First Amendment guarantees the right to worship. And so we are appealing what amounts to a discriminatory action against churches in our area, simply asking them to follow the US Constitution and give us as a church the same rights they’ve given businesses to reopen.”

In an interview with Metro Voice, Hopper said the county ruling is in violation of First Amendment protection that forbids government from prohibiting the free exercise of religion.

“We do not want to be defiant or oppositional to human government,” he told Metro Voice. “As a matter of fact, Romans 13 tells us that human government is one of the institutions of God for the good order of society. So we as the church have a responsibility to work with them and not against them. But then, there’s another principle that same Peter gave us in Acts 5:29 when he said to obey God rather than men.

Attorney Michael Whitehead told Metro Voice at the time that the lawsuit, filed in the U.S. District Court for Western Missouri in Kansas City (pdf), echoed Hopper’s assertion that the position of the county is in violation of First Amendment protection that forbids government from prohibiting the free exercise of religion.

In a 5-4 decision last April, the U.S. Supreme Court ruled that California’s regulation limiting the size of Bible studies and prayer meetings was an unconstitutional restriction on religious rights. The Jackson County settlement agreement cited three other cases that produced similar results.

“We were going to lose,” Dan Tarwater said after he and five other members of the county legislature voted Monday to approve the settlement. Legislators Ron Finley and Crystal Williams opposed the settlement.

After the “Metro Voice” broke the story of Mayor Quinton Lucas’ including churches in the order, it received national attention.

Lucas eventually walked back part of the 10/10/10 Rule after the “Metro Voice” story was picked up, dropping mandatory congregation list requirements and making it voluntary.

“Whether you’re Jewish, Christian, Muslim, Hindu — should recognize when discrimination by our government leaders is taking place and considering the nature of religious liberty and how unique it is, it is something worth standing up for,” Hopper told Metro Voice.